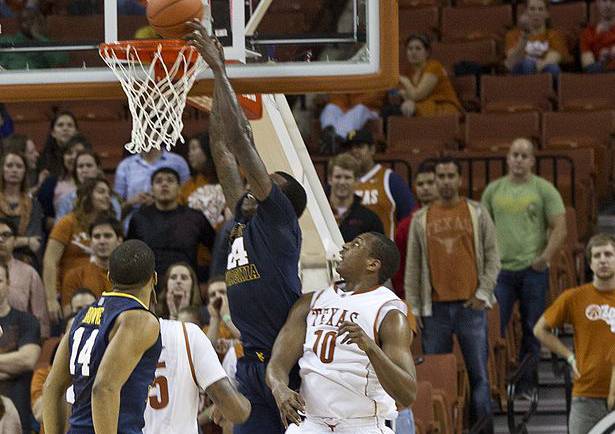 West Virginia's Aaric Murray (24) nudges the ball in for a score during action from the first half of the game between the Texas Longhorns and the West Virginia Mountaineers. (Photo by Alberto Martinez)

Texas men’s basketball is coming off a tough week, not necessarily a bad week, after dropping two road games to No. 3 Oklahoma by three points and No. 14 Iowa State on the road.

This week won’t really be easier for the No. 24-ranked Longhorns, despite back-to-back home games. First is No. 10 West Virginia. Second is No. 25 Baylor.

West Virginia – or as the kids are calling it these days, “Press Virginia” – entered Monday morning tied with Kansas for first place in the Big 12. The Jayhawks beat Oklahoma State on Monday, so a loss means they drop to a tie for second. Last week the Mountaineers lost 75-65 to Kansas early last week but crushed TCU on Saturday at home, 73-42.

The Mountaineers arrive in Austin on Tuesday looking to avenge their only home loss of the season. Texas’ biggest win of the season, more on that soon, came on the road when the Longhorns beat West Virginia 56-49.

Here are five Big 12 Texas- West Virginia games to remember before they play at 6 p.m. Tuesday at the Frank Erwin Center.

So far, this is probably the biggest win of the Shaka Smart era. Yes, North Carolina was No. 2 in the country when Texas beat the Tar Heels in December, but this game means more. Texas traveled to one of the toughest environments in the Big 12, played one of the best defenses in the country and secured its first true road game win over an AP top-10 team since the 2010-11 season. The West Virginia win is the highlight of the Texas season so far. Javan Felix scored the final nine Texas points and finished with a game-high 17.

The first time these two schools met in Big 12 Conference play was an odd season for both NCAA perennial programs. They both  struggled, and both missed the big tournament. Texas lost to Houston in the CBI, and West Virginia didn’t even go to the postseason. This first matchup, though, was at least entertaining, and the second one would be as well. Texas lost a double-digit lead in the final five minutes (Longhorns led 47-37 with 3:35 left) as West Virginia won its first-ever Big 12 game as a member in overtime.

A few weeks after playing the above overtime game, Texas traveled to West Virginia and played a tight contest with the Mountaineers. With West Virginia leading 59-54 with 12 seconds left, Sheldon McClellan (who is having a strong season for Miami, where he transferred after his sophomore season) was fouled shooting a 3-pointer. He made 2-of-3 free throws. Leading 59-56 with 10 seconds left, Texas put the Mountaineers on the line, and the lead went to 60-56. Then West Virginia, with .7 seconds left, fouled McClellan again while he shot a 3-pointer. McClellan made the first two free throws then purposely missed the third to try and give Texas a winning chance. It didn’t work, and West Virginia won.

This makes the list because it came in the Big 12 Tournament. Texas took care of business against West Virginia in its Big 12 tourney opener. Juwan Staten of West Virgina, the league’s top scorer, had just four points and shot 1-for-11 from the field. Jonathan Holmes scored 20 points, and Javan Felix added 16.

West Virginia’s Devin Williams and Jonathan Holton combined for 26 points and 13 rebounds in this home win. But Texas trailed 36-25 only to rally in the second half and out-scored the Mountaineers 39-35 in the final 20 minutes. Texas brought the lead down to 40-38 with 13:36 left in the game but could never complete the comeback. In the end, 17 Texas turnovers were just too much to overcome. Bobby Huggins, explain the game: