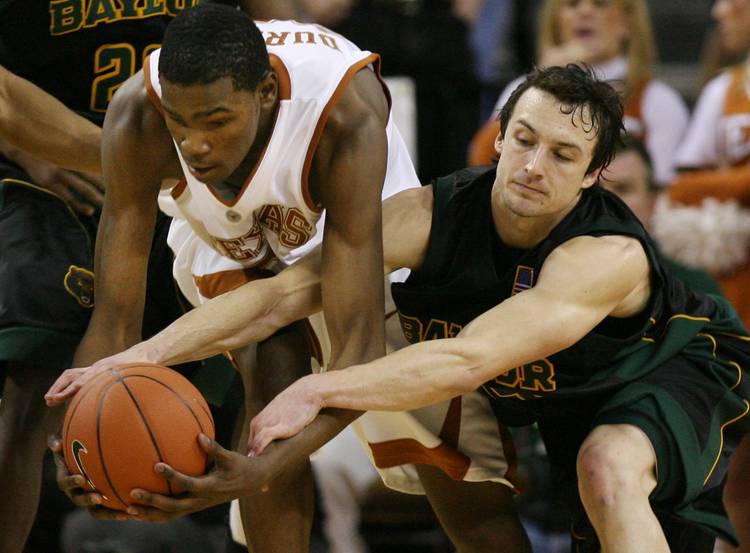 Texas's Kevin Durant (l) and Baylor's Aaron Bruce go fot the ball in the second half at the Frank Erwin Center on Saturday Jan. 27, 2007. Jay Janner/AMERICAN-STATESMAN

When Texas A&M left for the SEC, it had Texas looking for a new in-conference, in-state top rival in all sports.

And in almost all sports, that rival has become Baylor. In football, the rivalry had this fun moment in 2015:

On the basketball court, Baylor and Texas was already becoming heated before the Aggies’ exodus to SEC.

But last season, the game included a bench-clearing “brawl:”

At 1 p.m. Saturday, the Longhorns and Bears will finish off this season’s series at the Frank Erwin Center and there will be plenty on the line.

For starters, Baylor will be looking to improve its dwindling NCAA Tournament position and avenge a 67-59 home loss to Texas.

Meanwhile, the Longhorns went 0-2 on the road against Iowa State and Oklahoma, but on Tuesday had an impressive take-down of West Virginia, who began the week tied with Kansas at the top of the Big 12 standings. Shaka Smart may be the leader in the Big 12 Coach of the Year race right now. A strong finish may secure that honor for him and make Texas a top-5 seed team in the NCAA Tournament in March.

Lots on the line at the Erwin Center.

However, the Baylor-Texas men’s basketball history within Big 12 play is very one-sided for Texas (it’s opposite for the women). At one point,  the Longhorns won 24 straight games against Baylor. Barnes was the coach for every one of those games. Since snapping that streak in 2009, Baylor has gone 8-6 against Texas. All-time, the Longhorns are 162-84 against Baylor.

Here are five memorable Texas-Baylor Big 12 matchups from the past:

The last time Rick Barnes beat No. 14-ranked Baylor as the coach of the Longhorns was a memorable one. Isaiah Taylor hit a floater with 4.8 seconds left that gave the Longhorns a two-point win on Big Monday at home. It was Barnes’ 400th career win at Texas and capped a 10-point comeback for the Horns. Taylor only scored seven points in the game, but he scored the two biggest points.

Texas’ massive winning streak over Baylor snapped the previous season in the Big 12 Conference Tournament, but this was the first regular season win over the Longhorns since 1998. Texas was ranked No. 6 in the country when No. 24 Baylor came to Austin and won in overtime.

Freshman guard A.J. Walton was a 47 percent free throw shooter at the time, but he made three-of-four freebies in the final 17 seconds of overtime to secure this win for Baylor. Avery Bradley still had a shot to win the game, but he missed a buzzer-beating 3-pointer. The Bears scored 27 points off 18 Texas turnovers in the game.

This was one of the breakout seasons for Scott Drew’s program after a long a road back from possibly the worst scandal in the history of college athletics. This was one of that team’s biggest moments. Baylor had lost to Texas 24 consecutive times before meeting the Longhorns in the semifinals. LaceDarius Dunn hit a 3-pointer with 1:12 left in the game to give Baylor the lead for good.

Baylor lost to Missouri in the championship game, and they didn’t make the NCAA tournament, but reached the NIT finals. Texas would go on to lose to Duke 74-69 in the second round of the NCAA Tournament.

The closest Rick Barnes’ winning streak came to being snapped without being snapped was when Kevin Durant was a Longhorn. Texas survived this one-point game after both star freshmen, Durant and D.J. Augustin, struggled.

“Struggled” for Durant was 20 points and 14 rebounds for probably the best one-and-done college basketball player of all-time.

Texas led 68-60 with 1:40 left in the game. Missed free throws by Connor Atchley and an offensive foul by Augustin led to a 7-0 run in the final moments of the game. Baylor had a shot to win with the final possession coming off a missed free throw, but with no timeouts left, Baylor couldn’t set up a play and Carter or Dugat couldn’t get a look. Instead a little-used bench player named Mark Shepherd took the final shot.

Barnes improved to 19-0 against Baylor at Texas.

Step into the way-back machine, before Scott Drew had to rebuild the Baylor program from scratch and few years before the already mentioned scandal. Chris Owens for Texas scored 18 points and grabbed 11 rebounds as Barnes had his first close call against Baylor.

Before this game, Barnes’ team had beaten the Bears by a combined 75 points over four games.

Baylor pushed the Longhorns in this game,  as Wendell Greenleaf (not a fake name) and DeMarcus Minor made plays late to give Baylor a 58-56 lead. But Maurice Evans hit a shot to tie the game and Texas went on a 9-2 run in overtime to take control of the game.