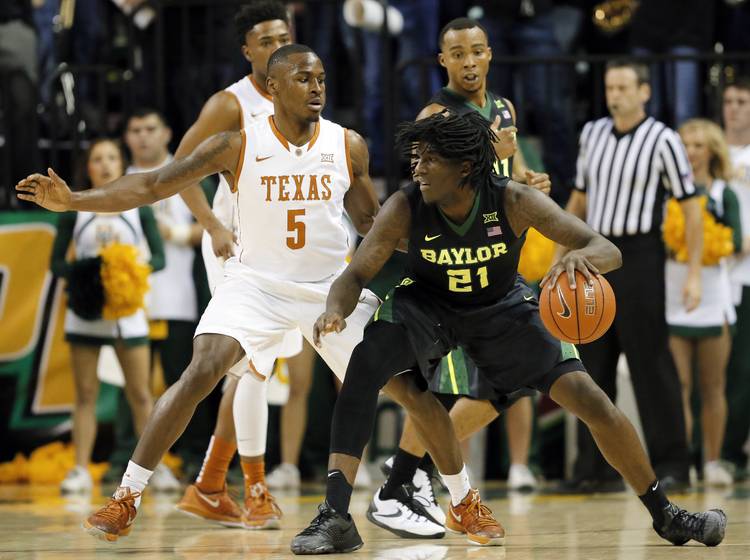 Baylor forward Taurean Prince (21) looks for an opening around the defense of Texas guard Kendal Yancy (5) in the first half of an NCAA college basketball game, Monday, Feb. 1, 2016, in Waco, Texas. (AP Photo/Tony Gutierrez)

Series history: Texas leads the all-time series, 162-84, and won five of the last seven games. The Longhorns had one of their best offensive games of the year during a 67-59 win in Waco on Feb. 1. Texas had 21 assists on 21 made field goals. Ten different players scored for the visitors. That victory came during UT’s recent four-game winning streak.

About the Longhorns: Texas, Baylor and Oklahoma are all tied for third place in the Big 12 standings at the moment with five games left in the regular season. All have 8-5 league records. … Coach Shaka Smart wants to protect the home court. The Horns are 13-1 at home this season and 3-0 in the Erwin Center against ranked teams. … G Isaiah Taylor is averaging a career-high 5.1 assists per game while committing only 1.8 turnovers per game. … With C Prince Ibeh getting things turned around at the foul line, the Horns are no longer the worst free throw shooting team in the Big 12. Or even ninth-worst. Texas now sits eighth with a .660 percentage.

About the Bears: Coach Scott Drew’s club managed to eek out a 100-91 home victory over Iowa State on Tuesday without F Rico Gathers, who had flu-like symptoms. Still, the Bears won the battle on the boards and F Johnathan Motley went 10 for 17 shooting and finished with 27 points. “Coach is a lot happier tonight,” Drew said. Baylor had 24 assists and only eight turnovers. … The Texas matchup begins a difficult closing stretch for Baylor, which plays three of its next four on the road. … F Taurean Prince continues to be one of the league’s most dynamic scorers. He’s averaging 15.1 points. Motley and Gathers rank first and fourth, respectively, in Big 12 field goal percentage.