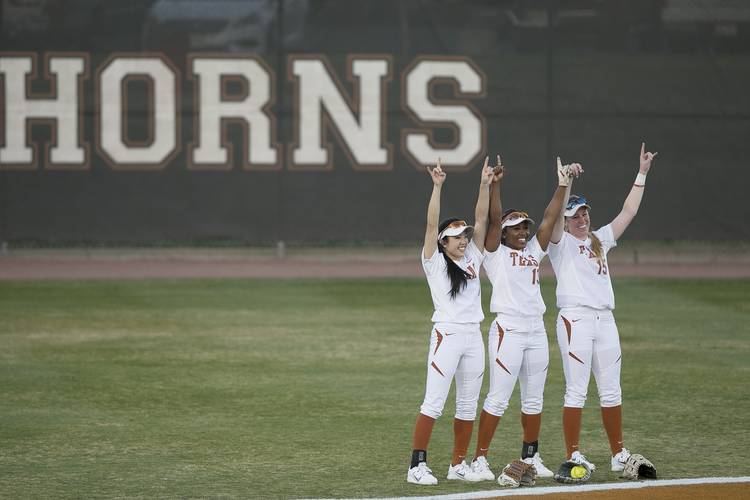 From left Stephanie Wong, Lindsey Stephens and Holly Kern give a Hook 'Em from the out field prior to their game against Arkansas on Thursday, February 11, 2016. Texas (10-0) is ranked No. 21 and 24 in two separate national polls. DEBORAH CANNON / AMERICAN-STATESMAN

The undefeated Texas softball team (10-0) jumped three spots to No. 21 in this week’s ESPN.Com/USA Softball poll.  It is one of two polls the Longhorns are currently ranked in as the USA Today/National Fastpitch Coaches Association (NFCA) poll has Texas ranked at No. 24.

The Longhorns are off to their best start since the 2013 season and are undefeated through their first 10 games for the sixth time in program history.

Last week, Texas swept through its competition at the Houston Hilton Plaza Invitational where the Longhorns outscored opponents 48-8, hit 19 extra-base hits, including 11 home runs, and had a team batting average of .403.

The Longhorns will host Abilene Christian, Tulsa, Illinois and Weber State this weekend for the Texas Invitational at Red & Charline McCombs Field. Texas gets the tournament started on Thursday against Abilene Christian. First pitch is scheduled for 7 p.m.