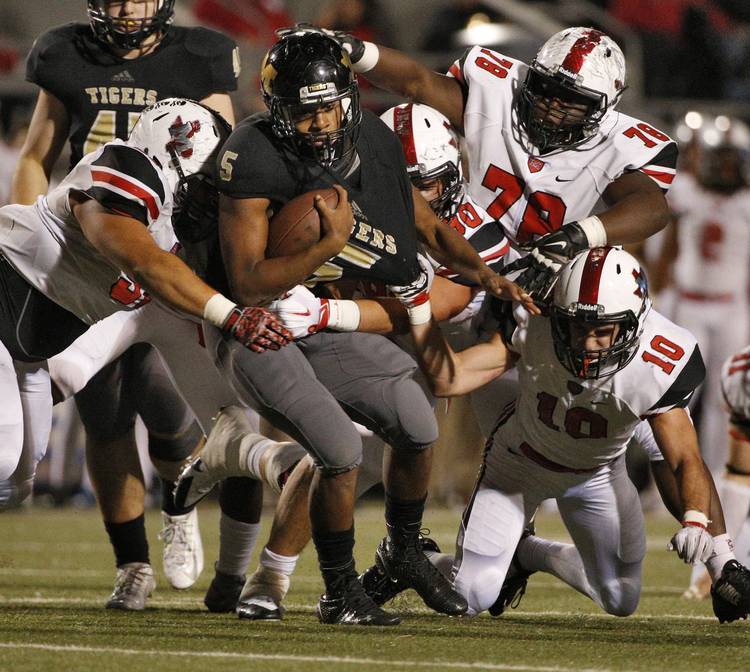 Andrew Fitzgerald could be the “dark horse” of a very talented recruiting class, so says coach Charlie Strong, and it’s easy to see why. He’s been told many times he looks like a J.J. Watt starter kit. Fitzgerald is a towering 6-foot-5-inch, 255 pound edge rusher who was a force at Flower Mound Marcus.

Here’s what Strong had to say in November when Fitzgerald committed:

Here’s some other chatter surrounding Fitzgerald.

Andrew Fitzgerald: What does it mean to you to play at Texas?https://t.co/ihcjL8LME3

Texas Commit Andrew Fitzgerald is severely underrated. Just watch his practice tapes this weekend he should be a 4* maybe even a 5* recruit

Congrats to Andrew Fitzgerald and Kaden Smith on being elected to the 2015 A.P. Texas All State Football Team@TheKadenSmith @andrewfitz90

How do you build community? Daily. Students inspired to be future Marauders! #BeRed pic.twitter.com/GQl8EcPvr4

Honored to be named Fort Worth TD club defensive player of the year pic.twitter.com/k4R4Bha0WE

.@andrewfitz90 can you start this weekend at WVU they are very scary and you are scary so it cancels out anyways call my cell

Breakfast with Bevo: Breaking down Texas’ Class of 2016 (Part 3)

On Second Thought: Podcast with Kirk Bohls and Cedric Golden