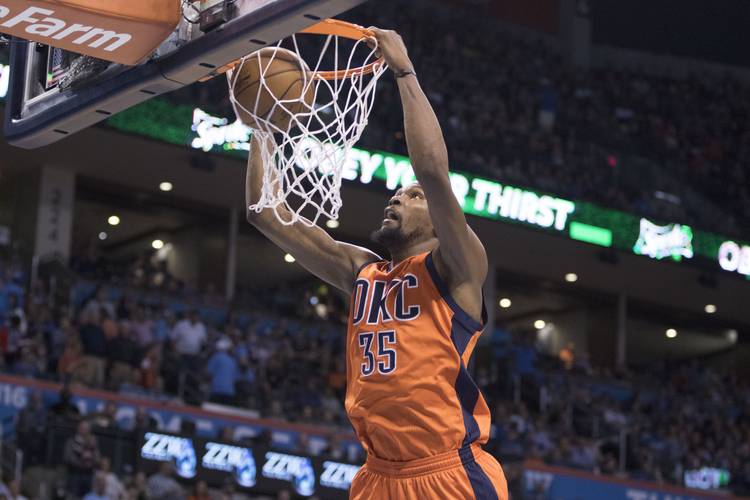 OKLAHOMA CITY, OK - FEBRUARY 21 : Kevin Durant #35 of the Oklahoma City Thunder dunks against the Cleveland Cavaliers during the fourth quarter of a NBA game at the Chesapeake Energy Arena on February 21, 2016 in Oklahoma City, Oklahoma. (Photo by J Pat Carter/Getty Images)

Kevin Durant, F, Oklahoma City Thunder: With just a few days left in February, Durant is averaging 30.1 points per game for the month. He’s had 43 straight games in which he’s scored at least 20 points for the Thunder. Oklahoma has lost two of its last three, but Durant has played well. He scored 31 in the 101-98 loss to the Pacers on Friday before dropping in 26 in the blowout loss to Cleveland on Sunday. His team bounced back on Wednesday, defeating the Dallas Mavericks 116-103. Durant had 24 points in the game.

LaMarcus Aldridge, F, San Antonio Spurs: He’s had a pretty good month, averaging 20.5 points per game. That’s better than the 16.7 he’s averaging on the season. In the Spurs 105-86 loss to the L.A. Clippers, Aldridge scored ten points on just 3 for 12 from the field. He scored 16 points and had eight rebounds in the 119-113 win over the Lakers. Aldridge then had a double-double against the Suns, scoring 19 points and grabbing ten rebounds. He had another off night on Wednesday, scoring seven points on 2 of 11 shooting, but he did have nine rebounds and five blocks.

Avery Bradley, G, Boston Celtics: He’s averaging 16.7 points per game in the month of February, up from 14.8 in January. He had an off night on Friday, scoring 12 in the 111-93 loss to the Jazz. He bounced back with two straight 20-point games. He had 20 in the 121-101 win over the Nuggets on Sunday and scored 22 in the 124-122 loss to the Timberwolves. He’s averaging two points less per game than he did in January, but he’s grabbing two more rebounds per game in February.

D.J. Augustin, G, Denver Nuggets: The move to Denver has revitalized Augustin’s season, as he’s been given the opportunity to play more minutes, or any minutes at all for that matter. He scored eight points and had six assists in his debut with the Nuggets. In Sunday’s loss to the Celtics he scored 13 points and had four assists. He followed that up with a ten-point, four-assist game against the Kings. He had an off night on Wednesday, shooting 1 for 6 for three points.

Myles Turner, F, Indiana Pacers: His playing an average of 30.1 minutes per game in February, ten more minutes per game than he did in January. He’s on an eight-game streak of scoring in at least double digits. He had 16 points and six blocks in the 101-98 win over the Thunder on Friday. He followed that up with a 12-point, eight-rebound game in the win over the Magic. He also had three blocks in the game. Following a loss to the Heat in which he had 16 points, he scored 24 points and had six rebounds in a 108-105 win over the New York Knicks. The rookie is definitely making a big impact.

Cory Joseph, G, Toronto Raptors: Joseph’s scored in double digits in four-straight games, including 18 in the 114-105 win over the Timberwolves. The previous Monday he scored 13 points and had six assists in the 122-95 win over the Knicks. He’s averaging 12.0 points per game in February.

Tristan Thompson, F, Cleveland Cavaliers: Thompson had two really good games followed by two really bad games in the last seven days. He scored 16 points and had ten rebounds in the 106-95 win over the Bulls on Thursday then had 14 points and 14 boards in the 115-92 win over the Thunder on Sunday. Since then he’s had just six points and 16 rebounds combined in his last two games.

P.J. Tucker, F, Phoenix Suns: The Suns are in the midst of a 12-game losing streak. He’s playing a lot of minutes, but he hasn’t scored in double digits since Feb. 8.