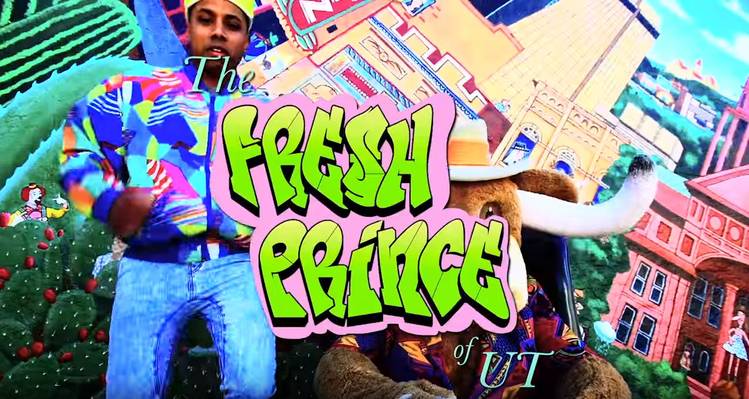 What would you get if Charlie Strong ate too much spicy food before bed and fell asleep watching Nick at Nite? Obviously, it would be “The Fresh Prince of UT,” uploaded to the Texas Longhorns’ YouTube channel on Thursday with pretty much no context.

Watch the magic unfold below.

Again, the YouTube video offers no explanation as to why Hook ’em is feeling his Will Smith fantasy. But it does offer the lyrics to your late-February jam:

Now this is the story, all about how
His life got flipped, turned upside down.
And I’d like to take a minute, just sit with me,
I’ll tell you how he became the prince of a school called UT.

Out in Texas, he was born and raised,
On the ranch is where he spent most of his days,
Chillin’ out, maxin’, relaxin’ all cool,
Grazing in fields right next to the pool,
When some Big 12 fans who were up to no good
Started making trouble in his neighborhood.
He got in one little fight and his fans disagreed.
They said, “You’re moving out to Austin and you’re going to UT.”

He pulled up to The Tower about 7 or 8
And he yelled to the Uber, “Yo, homes, smell ya later!”
He looked at the campus, he was finally free
To sit on his throne as the prince of UT.

Chillin' out, maxin' and relaxin' all cool with @Zeale #90sThrowback pic.twitter.com/rp2ICdlYqH

If the American-Statesman staff and Hook ’em were friends on Facebook, we would have Zeale in common. The rapper performed at Stubb’s for an Austin360 concert series in 2009 alongside Phranchyze.