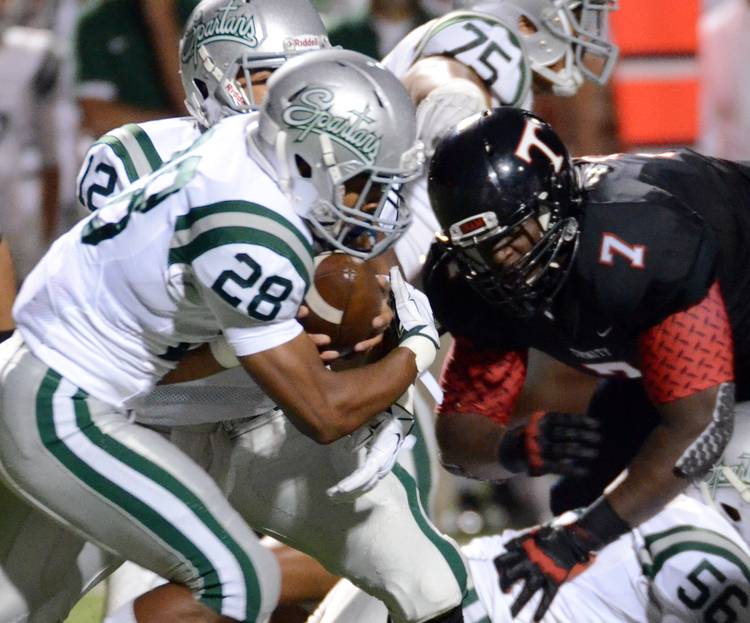 De La Salle's Antoine Custer, left, takes the hand off to head down field as Euless Trinity's Chris Daniels tries to break through the line in the first quarter of Saturday's August 29, 2015 football game at Newsom Stadium in Mansfield. Special/Bob Haynes 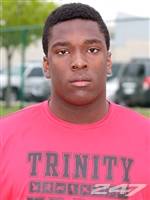 HOW HE GOT HERE: Daniels’ journey to Texas had plenty of plot twists. Texas didn’t even get into the game until late, when he was all set to commit to Oklahoma. In fact, he did pledge to the Sooners on Dec. 18 — one day after Texas offered. He decommitted one month later, on Jan. 20, then visited Tennessee three days later, then Texas A&M six days after that, and then, on national signing day, announced he was signing with Texas.

AT EULESS TRINITY: Was a two-time All-District pick and District 7-6A’s defensive player of the year as a senior. At Trinity, Daniels’ teams went a combined 33-6 overall and 18-1 in district. The 2013 team made it to the state quarterfinals and the 2014 team pitched two shutouts and held six other teams to 10 points or fewer. … Daniels also threw the shot put and discus, winning the district shot title his junior year.

THE NUMBERS GAME: Like Texas’ Patrick Vahe, who like Daniels is a Euless Trinity product, Daniels knows what it feels like to win. He won 85 percent of his career games at Trinity and his career district winning percentage is even more impressive — 95 percent, and that district includes the likes of Southlake Carroll and Coppell. … In high school, Daniels wore both No. 6 and No. 7. Either should be available at Texas. As a junior, Daniels was listed at 6-3, 277; as a senior, 6-3, 300; on signing day, Texas had him at 6-4, 328.

1. Reminded that he was seven months away from facing Notre Dame, Daniels said, “I need to go to the weight room after this meeting! I was thinking, ‘What am I going to bench press today?’” Daniels said the coaches prefer him to lose about 20 pounds, putting him somewhere in the 300-pound range. “I could go in at nose (guard) because of my weight,” he said. “I can go in on the end because of my speed. You’re going to see it this year. Yes sir.”

2. Never underestimate the power of celebrity when it comes to recruiting. Daniels got the chance to have a FaceTime call with former WWE wrestling star Mark Henry, and he talked briefly with Matthew McConaughey. “Those type of things kind of sealed the deal for him,” Chris Daniels Sr. said. “He told me he liked football 100 percent, but acting is definitely 99.5. That really pulled him all the way into Texas.”

3. Trinity coaches said Daniels’ upbeat personality is no ruse. “There’s never a day when he comes to practice upset,” defensive line coach Donald Tryon said. “If he is, you don’t know it. If he’s upset about soothing at all, it don’t last longer than 10 or 15 seconds. He’s definitely a joy.”

For our full profile on Chris Daniels as part of our Longhorns Class of 2016 series, click here.