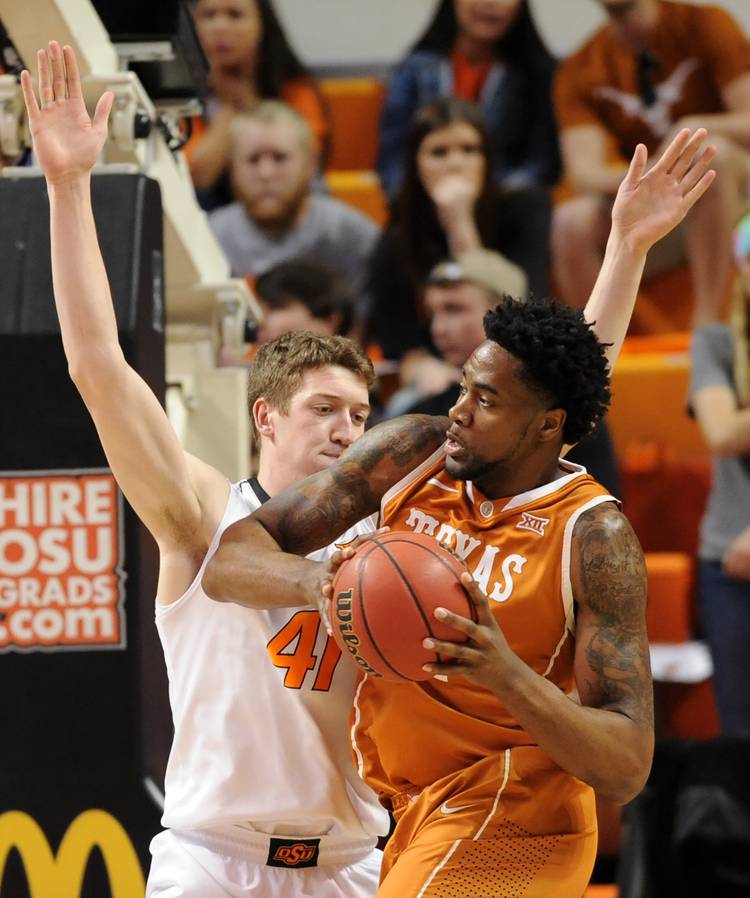 STILLWATER, Okla. — Texas freshman Kerwin Roach has quietly hovered on the perimeter, watching and learning all along the way.

On Friday, Roach stepped to the forefront and led the 23rd-ranked Longhorns to a 62-50 victory over the Oklahoma State Cowboys. He scored all 15 of his points in the second half on a night when several UT veterans were having trouble finding much offensive rhythm.

Roach scored on a driving layup to tie things up, 34-34, in the second half. He drilled a 3-pointer and then later made two sensational plays — a driving left-handed layup and threw a touch pass to Prince Ibeh for a monster dunk and foul with 3:43 remaining.

Roach’s dynamic move inside for a short jumper gave Texas a seven-point lead with 2:59 remaining. Then, he drilled a 3-pointer just before the shot clock expired with 1:35 to play to make it a 10-point game.

Roach is the star of the night. But how about Shaq Cleare? Texas hadn’t been getting much from centers Prince Ibeh or Cleare in recent weeks. But Cleare finally found a shooter’s touch against OSU. His baby hook fell a few times, and Cleare created room for himself on the low block. The 6-foot-8 big man finished with eight points and eight rebounds.

Texas’ perimeter defense was nonexistent in the blowout loss to Kansas. The Horns were fortunate the Cowboys couldn’t hit much from 3-point range. OSU was 3 for 11 midway through the second half. Texas didn’t fare much better, hitting only 4 of 14 long-range shots through the first 24 minutes.

After the Kansas State game, Texas guard Demarcus Holland walked up to a reporter and joked, “Asked me a question. I don’t get those much.” Well, Holland certainly made his presence known in the first half with two driving baseline layups, his offensive speciality. He also flashed inside for a third layup and a three-point play, giving Texas a 22-21 lead with 6:33 left in the first half.

The regular season is over. Now, it’s on to the Big 12 tournament at Sprint Center in Kansas City, Mo. By knocking off Oklahoma State, Texas is likely to finish fourth or fifth in the league standings. The eight remaining teams will finish out the regular season on Saturday. The Horns are likely to play in the 4-5 game at 11:30 a.m. Thursday. The complete Big 12 tournament schedule will be finalized by dinnertime Saturday.