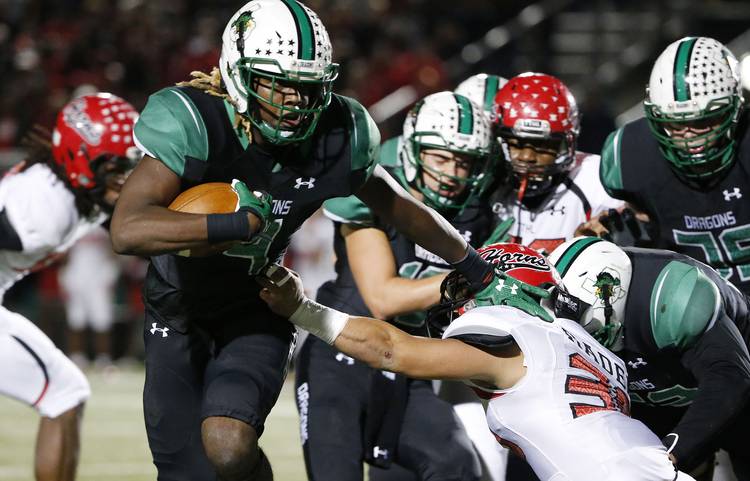 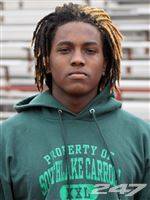 HOW HE GOT HERE: Humphrey was recruited by linebackers coach/recruiting coordinator Brian Jean-Mary and former receivers coach Jay Norvell. Former offensive coordinator Shawn Watson also was in on the recruitment. It came down to Texas and Wisconsin, and Humphrey committed to the Longhorns on Jan. 30 — two weeks after he took his official visit to Texas, one week after his official visit to Wisconsin.

AT SOUTHLAKE CARROLL: Was a two-time all-state selection in 2014 and 2015, when he helped the Dragons go 22-4 in two playoff seasons. Played football, where he starred as a running back but also made an impact as a receiver, as well as basketball and track and field. Scored 57 career touchdowns, rushing and receiving.

HUMPHREY’S BEST GAME — SO FAR: Hard to choose. It wasn’t his game-winning score against Tulsa (Okla.) Union last September, or his game-winning touchdown in overtime against Coppell, or his 200-yard rushing night against Colleyville Heritage. We’ll go with Carroll’s 52-14 win over Midland Lee, one week after his performance against Tulsa. Humphrey had 10 carries for 131 yards and a touchdown, and also caught 10 passes for 153 yards and three more scores that night.

THE NUMBERS GAME: Humphrey’s size skyrocketed in between his junior and senior seasons; Dave Campbell’s “Texas Football” magazine listed him at 6-3, 180 heading into the 2014 season, and then 6-5, 200 before 2015. (Texas lists him at 6-4, 210.) Humphrey mostly wore No. 25 at Southlake Carroll; that number’s already claimed at UT by sophomore running back Chris Warren III. He did, however, also wear No. 4, which is being vacated by Daje Johnson. Humphrey averaged 6.6 yards a carry in high school, and 14 yards per reception. He scored 54 total touchdowns his final two years in high school.

THEY SAID IT: “I tell you what, Jordan is a unique combination. He’s a great blocker, great running back, great pass receiver, he even returned our kicks.” — Hal Wasson, Southlake Carroll coach

1. Humphrey laughs about it now, but he didn’t start on offense in middle school. He was Obi Eboh’s backup. Eboh became a standout cornerback at Southlake Carroll who committed to Texas last September, but ultimately signed with Stanford.

2. Humphrey, who excelled in football and basketball and also competed in the high jump, was pushed to pick one sport early during his high school career and stick with it. Forget that, he said. “My parents always said a multi-sport athlete was better than a single-sport athlete. Don’t put all your eggs in one basket,” he said.

3. Humphrey narrowed his list of 15 scholarship offers down to Texas and Wisconsin. The most difficult thing during his recruiting process was feeling out coaches to see if they were serious or not. “The hardest part is saying no to coaches,” he said. “Once you figure out how to say no, that’s when you’re most comfortable. It got easy for me.”