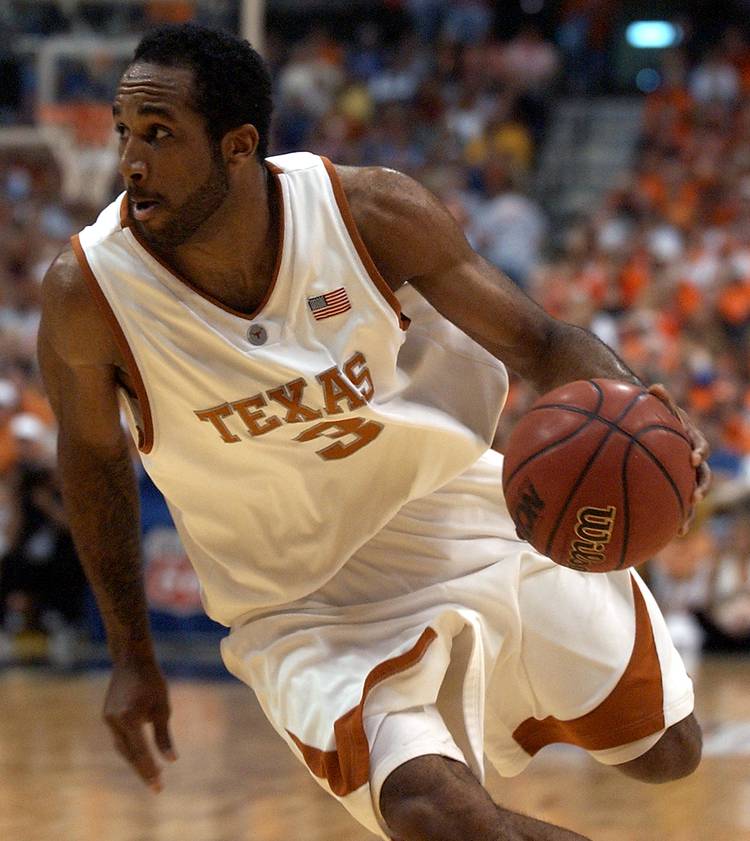 UT's Brandon Mouton drives down the court against Kansas in Dallas as part of the Big 12 tournament. Deborah Cannon/American-Statesman .

But that doesn’t mean they’ve been bad; in fact, Texas’ three straight championship game appearances is one of the best streaks in the tournament’s history with only Kansas and Oklahoma matching.

Here are the five Big 12 Tournament Longhorn games to remember:

Tom Penders won 208 games as the head coach of Texas from 1988-1998. This was No. 208, and it came in upset fashion. Oklahoma State was the second seed in the Big 12 Tournament and was led by Big 12 Newcomer of the Year, Doug Gottlieb (yes, the very same college basketball analyst), and Desmond Mason, a future NBA dunk champion. Chris Mihm led the way for the Longhorns.

This was one of our five Texas-Oklahoma State games to remember.

The tournament was held in Dallas and Texas was the two seed after a 12-4 Big 12 season. Texas-Oklahoma was one of our 5-games to remember from that series.

Here’s the skinny on this game:  Brandon Mouton scored five points in the final 26.8 seconds as Texas overcame a 12-point deficit with little more than seven minutes left to win the game. Mouton scored 16 overall.

Here’s the skinny on this game: No. 11 Texas took down the No. 18-ranked Jayhawks in the semifinals of the Big 12 Tournament, but this game is known for one person: Brandon Mouton. Mouton scored 10 straight points in the second half and Texas overcame an early 11-point deficit. Texas held the Big 12’s top player, Wayne Simien, to just nine points.

What ruins this tournament for Texas? They lost 65-49 to Oklahoma State in the championship game.

Texas was the co-Big 12 Champions this season, splitting the title with Kansas, who they beat 80-65 at the Erwin Center in the regular season. Texas had the top seed in the tournament, were led by the Big 12 Player of the Year (P.J. Tucker) and the Defensive Player of the Year (LaMarcus Aldridge). Texas A&M was a rising program under Billy Gillispie, and Acie Law was starting to become the All-American he would some day be.

But this game belonged to Tucker. He scored 26 points and grabbed 13 rebounds. “P.J. is special, he is. His mind-set, what he’s got,” coach Rick Barnes told the Associated Press after the game. “I don’t think he had any more motivation. …This time of year, you would expect what he did today.”

Law hit a 3-pointer at the buzzer to cut the score to four.

Texas went on to lose to Kansas in the championship game 80-68.

And now the greatest Texas-Big12 Tournament game, and probably the best ever Big 12 tourney game:

This was on our list of greatest Big 12 games ever and 5 Texas-Kansas games to remember. Yes, Texas lost. But it was the closest they ever came to winning the tournament. Kevin Durant may have played his best college basketball game by scoring 37 points and grabbing 10 rebounds. In the end, it was Kansas coming from behind after trailing by five at halftime to beat Texas in overtime. It had Kansas coach Bill Self stating the obvious about Durant to the Associated Press: “I don’t want to play him again.”

Durant scored 92 points in three games at this tournament. More from Self: “He is a joke. You can plug him into any team in the country at any level and he can score. NBA, whatever, just plug him in and he can go get baskets.”

Despite his team not winning the tournament, Durant was named Most Outstanding Player of the Big 12 Tournament.

Texas-Kansas was the tournament final for a third straight year in 2008, with the eventual National Champion Jayhawks beating an Elite Eight-bound Texas team.

Iowa State won the Big 12 Tournament last season, but they had to rally in their last two games to do it. This was our top game to remember from Texas-Iowa State series.

Texas fans hide your eyes, Monte Morris is about to make a shot:

To be fair, Texas wasn’t as good as Iowa State last year. It would have been Texas’ best win of the season. The Cyclones were the No. 2 seed in the tournament and lived in the top 15 all season long. Texas was talking more about replacing their coach than winning the tournament. Had Texas made the Big 12 Tournament final, maybe Rick Barnes is still at Texas, who knows?