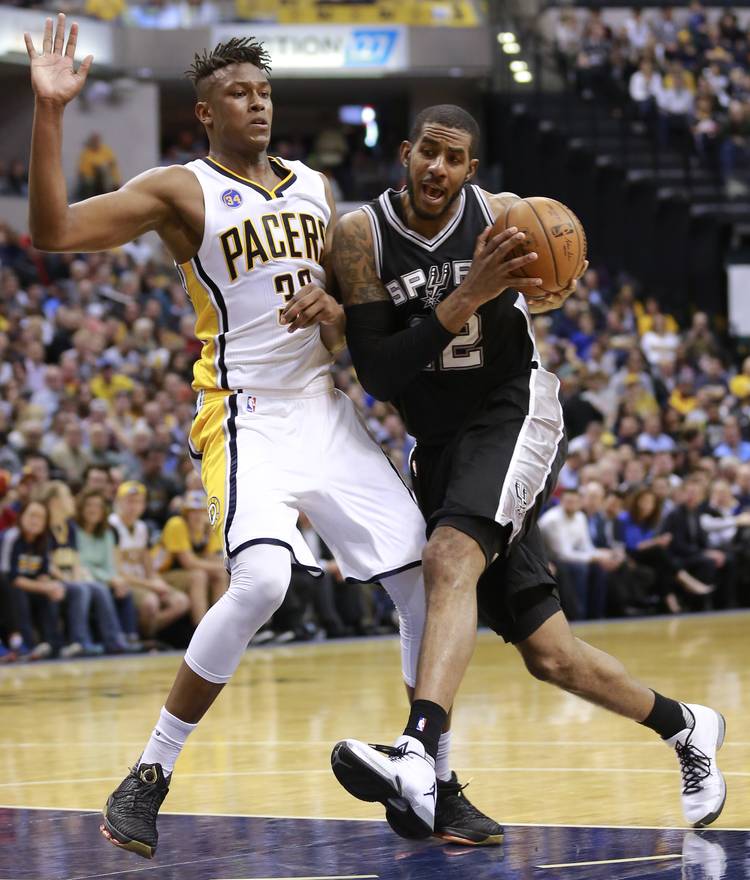 Kevin Durant, F, Oklahoma City Thunder: Through Wednesday, Durant has scored at least 20 points in 50-straight games. The Thunder have won two out of three since we last checked in, including wins over the Clippers and Bucks. Durant scored 30 points and had 12 rebounds against the Clippers. Before that he scored 32 points, had 13 rebounds and eight assists over the Bucks. He was one assist short of a triple-double in the 121-106 loss to the Warriors, but he also had nine turnovers.

LaMarcus Aldridge, F, San Antonio Spurs: Aldridge has scored at least 20 points in his last five games. He scored 26 in the Spurs’ 94-86 win over the Pelicans. He sat out Saturday’s game against the Kings on Saturday and then put up 23 points and 12 rebounds in the 99-91 loss to the Pacers on Monday. The Spurs bounced back against the Timberwolves as Aldridge scored 29 points and had four blocks in the 116-91 win. He’s averaging 25.3 points per game in March.

Myles Turner, F, Indiana Pacers: Turner’s had a tough time scoring in the month of March so far, but the Pacers have won three out of four in the month. Most recently the Pacers took out the Spurs 99-91 on Monday. Turner had nine points, pulled down ten rebounds and made two blocks. He started the month scoring 12 points in the 104-99 win over the Bucks. He’s averaging 7.3 points per game and five rebounds so far in March.

Avery Bradley, G, Boston Celtics: Bradley hasn’t scored 20 points since Feb. 22, but his Celtics have won six out of seven games in that span. Most recently he scored 15 points in the 116-96 win over the Grizzlies. Bradley scored 12 points in the 120-103 loss to the Cavs. His best scoring output came in the 116-93 win over the Trailblazers when he had 17 points.

D.J. Augustin, G, Denver Nuggets: Augustin has scored at least double digits in eight of the ten games that he’s played with the Nuggets. In January he scored just 1.7 points per game as he rode the bench for most of the month as a member of the Oklahoma City Thunder. Once he got traded his minutes increased and he’s revitalized his season. Augustin had 12 points in the Nuggets’ 121-120 loss to the Nets before he scored 12 in the 116-114 win over the Mavs. He scored ten points and had six assists in the win over the Knicks.

Cory Joseph, G, Toronto Raptors: Joseph hasn’t scored in double digits so far in the month of March, but the Raptors have won three of four games heading into Thursday. He had nine points, five rebounds and three assists in the 113-107 loss to the Rockets. He had six points, two rebounds, two assists and two steals in the 117-115 win over the Trailblazers.

P.J. Tucker, F, Phoenix Suns: Tucker helped the Suns win two games in a row for the first time since Dec. 9. Tucker scored seven points, seven rebounds and four assists as the Suns defeated the Magic 102-84 on Friday. Tucker followed that up with a six-point, ten-rebound performance in the 109-100 win over the Grizzlies.