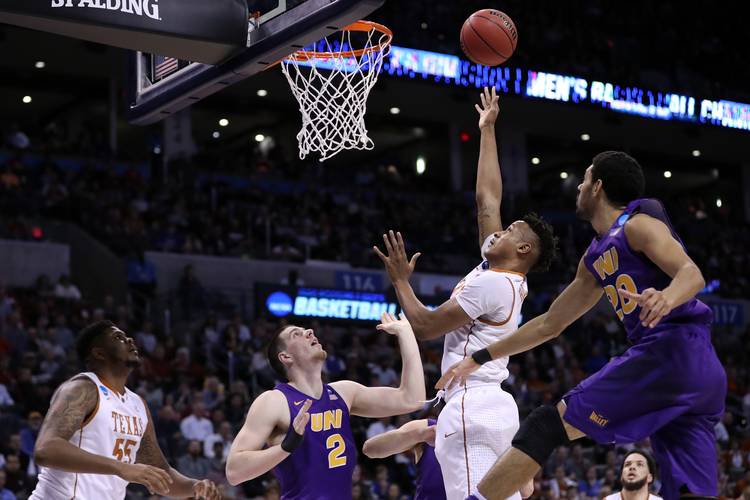 Texas guard Demarcus Holland shoots in the first half against Northern Iowa's Jeremy Morgan during the first round of the 2016 NCAA Men's Basketball Tournament at Chesapeake Energy Arena on March 18, 2016 in Oklahoma City, Oklahoma. (Photo by Ronald Martinez/Getty Images)

OKLAHOMA CITY — Texas coach Shaka Smart has spent the entire season working on what he calls “the six inches between the ears.”

He got infuriated whenever the Longhorns got “bummed out” and encouraged them to stick out their chest and say, “We can do this.”

With time winding down, Jesperson let loose a runner from half-court. The shot banked in, just like Oklahoma’s Buddy Hield’s shot did during the Big 12 tournament. Only this one counted, and the Longhorns season is over.

But Northern Iowa had its most famous alum, NFL quarterback Kurt Warner, in the stands, too. Warner and other Panthers’ fans were chanting, “U-N-I!”

This was arguably the best game of Isaiah Taylor’s season. He’s scored more points in various games along the way. But Taylor’s driving, slashing and outside shooting kept Texas in the game early and helped the Horns climb back into the driver’s seat. Taylor hit a career-high three 3-pointers in the first half and tallied up 16 points before the break.  He finished with 22 points and went 9 for 11 from the free throw line.

As with any NCAA game, look at the free throws. The Panthers were 25 for 32 from the line while the Longhorns were 13 for 18. Texas simply didn’t get to the line enough.

The loss completes a ragged first-round performance for the Big 12. The league is now 3-4 overall so far in this NCAA Tournament, a rather embarrassing mark for a league that was thought to be the nation’s best. Meanwhile, UNI improved to 7-1 against teams that were in the original 68-team field.

Texas’ once-injured center played only two minutes against Baylor in the Big 12 tournament. Eight days later, Ridley played the “significant” minutes coach Shaka Smart expected. Ridley checked into the game with 17:13 remaining in the first half and earned a standing ovation from the UT fans behind the bench.

Just 13 seconds later, Ridley scored on a tricky layup and drew a foul. He ended up playing just five minutes in the first half and didn’t play at all after halftime. Smart had thought Ridley would play about 20 minutes.

That must’ve been a heck of a halftime speech. The Longhorns were trailing by eight at the break but came out smoking hot. Javan Felix hit a 3-pointer, Connor Lammert scored on a tip-in and Taylor scored on a thrilling layup and drew a foul. He missed the free throw, but Texas tracked down the rebound.

Then, seemingly out of nowhere, Demarcus Holland drained a 3-pointer from the right wing, capping a 10-3 run that cutting Northern Iowa’s lead down to one. How rare was that Holland trey? He’s made only four in February and March combined.

Seven points are awarded for touchdowns. Basketball teams aren’t supposed to get seven points on a single possession. Yet that’s what happened in a game-changing sequence in the first half.

Paul Jesperson drilled a 3-pointer, and officials called a foul on Shaq Cleare under the basket. Replays showed that Cleare hit Bennett Koch high with his elbow, thus earning Cleare a flagrant one foul. Koch hit one of two ensuing free throws. Then with UNI still maintaining possession, Jeremy Morgan drained a 3-pointer from the left wing, giving the Panthers a 21-13 lead.

That sequence fueled a 23-2 run where Texas would score only one bucket in almost eight minutes.

We’ll all be denied an epic Texas-Texas A&M battle in the second round. The Longhorns are now headed home and into an uncertain future. Five seniors are departing, and Taylor is believed to be looking at going into the NBA draft. The Horns are believed to be the front-runner for five-star recruit Jarrett Allen of St. Stephen’s. Smart will likely have to sign a graduate transfer or a junior college player just to complete the roster.