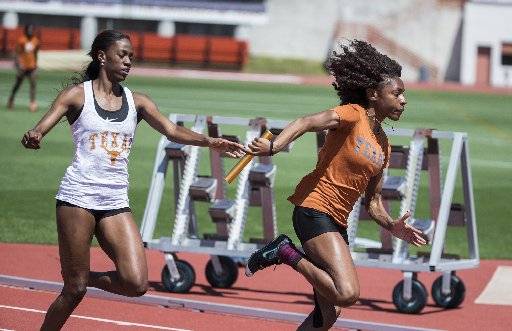 Ashley Spencer hands off the baton to Courtney Okolo during track practice in 2015. They won gold in the 4x400 meter relay on Sunday. (RICARDO B. BRAZZIELL / AMERICAN-STATESMAN)

Team USA won 23 medals, including 13 gold, in the most dominant performance in meet history. Team USA beat its former record of 19 total medals. The 13 gold medals also broke the meet record. The closest country in the medal count was Ethiopia with five.

Spencer also competed in the women’s 400 meter race and took silver. She ran the 400 in 51.72 seconds and earned her first individual medal at a world championship meet. Team USA’s Quanera Hayes was just ahead of Spencer, winning gold in 51.09 seconds.

Carter set a new American record and had the farthest throw in the world this year to take first. She led heading into the final round with a 19.31 meter toss, then Hungary’s Anita Marton passed Carter with a 19.33 meters throw. Carter beat her previous throw by nearly three feet, a 20.21 meters heave, on her final attempt to win gold.

“Today meant a lot to me. I’ve been working really, really hard and struggling with some things over the years. I was able to put together some pieces today that let me know that my hard work was paying off. I’ll just continue to keep working hard and get ready to make the team in July,” said Carter.

Texas recruiting trail: What Shaka and the Horns do next