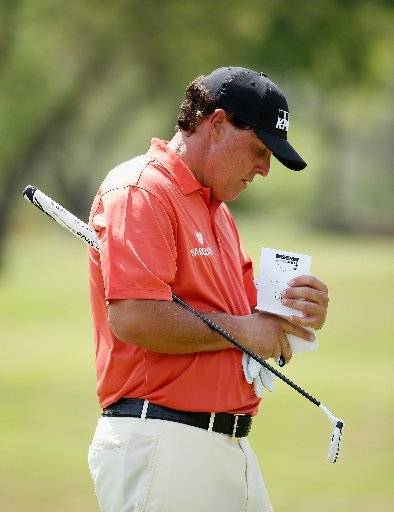 Star golfer Phil Mickelson, who is competing this week at the WGC-Dell Match Play tournament, wore an orange shirt for his Wednesday round at Austin Country Club.

He was asked if he was sporting orange in support of the Texas Longhorns.

“I’ve built some pretty good relationships with some of the guys around here at the University of Texas. I’m proud to be playing here at Austin.”

Mickelson has been friends with former Longhorn coach Mack Brown for years. The two used to joke about winning the big one. When Mickelson finally won the Masters, he called Brown and said “it’s your turn.”

Brown was spotted Wednesday in the Dell Match Play gallery. He was walking with UT golfing icon Ben Crenshaw.

Mickelson, who had taken off the past two weeks, had an easy opener, knocking off Matthew Fitzpatrick. He was up five with four holes to play.