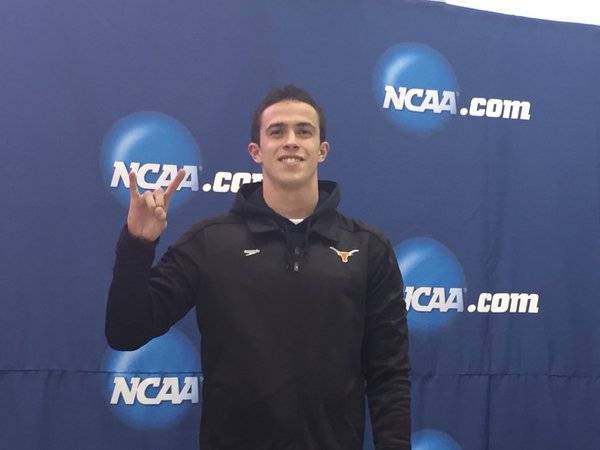 Texas is the defending national champion in men’s swimming. And given the way they’ve opened the first full day of competition Thursday in Atlanta, another team title could be imminent.

UT won the first three events Thursday. Coupled with their victory in the 800-yard free relay Wednesday, the only event of the evening, the Longhorns posted four wins in a row. Then they finished the night with an exclamation point, setting an NCAA and U.S. Open record in winning the 400 medley relay. UT has set major records in two of the three relays.

The Longhorns lead the team standings with 209 points. Florida is second with 163, followed by California (141) and North Carolina State (137).

Texas has been a dominant program in swimming, but the Longhorns never have enjoyed such a streak.

You may be wondering, so we'll answer: NO, Texas had not won the first 4 events at an NCAA Championship before. Not the first three, either.

Freshman Townley Haas was the surprise winner in the 500 free. The defending national champion was UT’s Clark Smith, but he failed to score in the race.

Then Will Licon successfully defended his title in the 200 individual medley.

The team of John Shebat, Licon, Schooling and Conger swam a 3:00.68, which broke the U.S. Open standard the Longhorns set last year. The reason it’s not an American record is because Schooling is from Singapore.

Schooling swam the fastest butterfly split ever. Then Conger, one of the country’s best in the fly, anchored UT in the freestyle. The medley relay usually shows the depth of a team.

Conger for the win! pic.twitter.com/6gFB2CUiy5

The Longhorn divers also give UT an advantage over the other team title contenders.