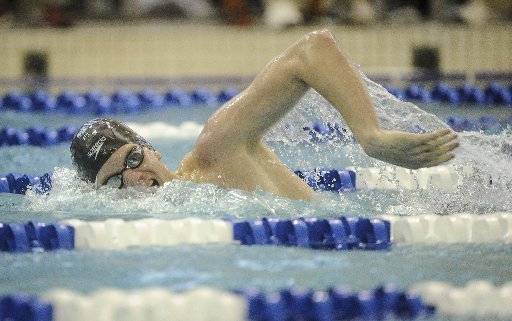 Townley Haas, who is only a freshman, smashed an American record Friday night in winning the 200-yard freestyle at the NCAA championships.

Meanwhile, teammate Joseph Schooling also swam the fastest time ever in the 100 butterfly.

The two helped push Texas to a commanding lead in the team title standings, with the defending national champion Longhorns owning a 366-271 lead over California. Florida was third at 255 and North Carolina State was fifth at 197.

It was Haas’ second NCAA title of the meet. He won the 500 free to open the meet for the Longhorns. No UT swimmer has pulled off that combo of events at the NCAAs.

Schooling successfully defended his national title in the 100 butterfly, with teammate Jack Conger finishing third. Schooling’s time of 44.01 broke the U.S. Open record of 44.18 set by Stanford’s Austin Staab in 2007. Schooling is from Singapore, so he can’t qualify for the American record, allowing Staab to keep that standard.

Haas continued the Longhorns domination of the distance. He’s the third straight UT swimmer to own the American record.

Congrats to @TownleyH just straight destroying my American record in the 2 free!!!! Keeping it in the Texas family! #HookEm

Check here for an updated score in the team race after Friday’s full night of competition.