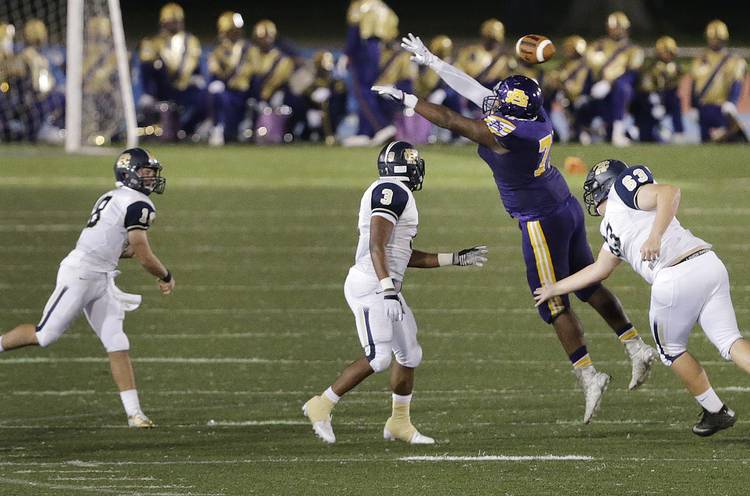 Holy Cross quarterback Chandler Fields, far left, throws through the tall arms of St. Augustine defensive end D'Andre Christmas-Giles in the first half of their game at Tad Gormley Stadium in New Orleans on Thursday, October 29, 2015. (Photo by Chris Granger, Nola.com | The Times-Picayune) 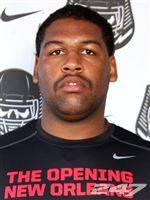 HOW HE GOT HERE: Christmas-Giles announced he’d sign with Texas the night before national signing day, choosing the Longhorns over LSU and TCU. Recruited by Brick Haley, a former assistant at LSU, Texas stayed with him even after he had committed to Tennessee right before his senior season began. Other schools did as well. But it probably wasn’t coincidence that Christmas-Giles took his official visit to Texas on Dec. 12 — and then de-committed from Tennessee the very next day. LSU, Texas A&M and TCU got involved late, but he ended up with Texas.

AT ST. AUGUSTINE: Talk about a one-year wonder. Christmas-Giles played only his senior year there due to transfer rules — he had to sit out his junior year after transferring from Salmen High in Slidell, La. But he earned honorable mention all-state honors and was his district’s co-defensive MVP. He helped lead his teams to the playoffs both as a sophomore and senior.

CHRISTMAS-GILES’ BEST GAME — SO FAR: With only one season’s of work to consider at St. Augustine, his best game probably was against Scotlandville, a Baton Rouge magnet school known more for boys basketball than football. Scotlandville won easily, but Christmas-Giles registered a season-high seven tackles, including six solo stops. In terms of playmaking, though, consider his effort against Holy Cross last fall — when he returned a fumble 50 yards and nearly scored, and added a kickoff return.

THE NUMBERS GAME: The folks over at Rivals were big fans of Christmas-Giles — they rated him as the nation’s 83rd-best overall recruit, its No. 6 defensive tackle and the No. 3 overall recruit in Louisiana. Those numbers were far off 247Sports’ composite ratings of the industry’s leading recruiting sites. After not playing in 2014, his recruiting ranking rose from 2-star to 4-star as a senior. He ended up with more than 30 scholarship offers. He was the 17th commitment for Texas’ 24-player class, and one of three 4-star defensive tackles the Longhorns signed (Houston Westside’s Jordan Elliott, Euless Trinity’s Chris Daniels).

THEY SAID IT: “He’s always been an inquisitive kid. He always wants to know what’s the next step. He’s always looking for answers.” — LaTonya Christmas

1. D’Andre Christmas-Giles was born in Milwaukee, Wis. and lived there for three years before his father was murdered and the family moved to New Orleans. He said grew up in poverty and was tormented with racial slurs, and in the fifth or sixth grade he retaliated by punching and knocking out a provoker. That tough upbringing eventually ceased, and Christmas-Giles says, “I’m real good right now.”
2. St. Augustine, where Christmas-Giles attended his junior and senior years, is a prestigious all-male, African-American private school whose alumni include Texas basketball guard Javan Felix, LSU running back Leonard Fournette, ESPN anchor Stan Verrett and New York Times executive editor Dean Baquet. Admission is about $8,000 per year.
3. St. Augustine coach Al Jones has a son who should be familiar to Texas fans. Chad Jones was a left-hander pitcher for the LSU team that beat the Longhorns for the national title at the 2009 College World Series. A dual-sport star, Jones also was a defensive back for LSU’s football team and was drafted in the third round by the New York Giants. But before he could start his pro career, Jones was involved in a horrific car crash and nearly lost his leg.​