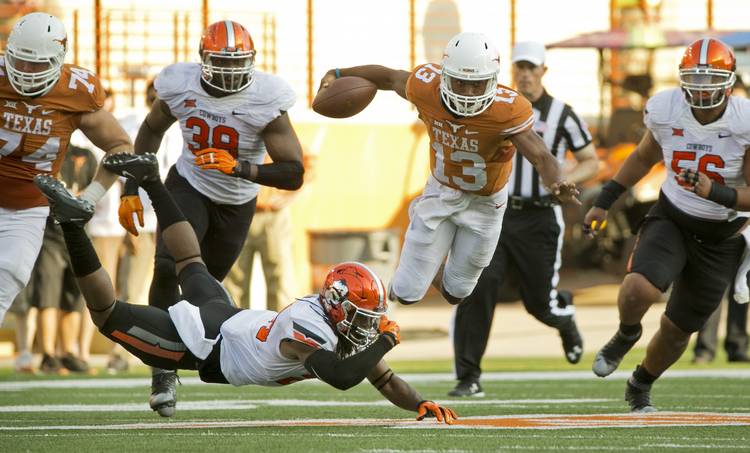 Texas quarterback Jerrod Heard, one of three contenders for the starting job, suffered a shoulder injury during Tuesday’s practice. His status for the rest of spring practice is unknown.

UT officials, who are loathe to announce injuries, took the rare step of sending out a press release about the injury midday Wednesday.

In a posted Snapchat photo, Heard is shown with his right arm in a sling. A source close to Heard said Wednesday afternoon that team doctors were still awaiting complete medical results.

Heard’s injury news came one day after offensive coordinator Sterlin Gilbert praised Heard, who started 10 games last season, along with fellow contenders Tyrone Swoopes and Shane Buechele. Gilbert said no quarterback had earned the starting job yet, as he was still in the evaluation phase.

“He spins the ball well,” Gilbert said of Heard. “All three of those guys have done a great job of trying to understand and know exactly what we’re doing on offense. Those guys have dived into their iPads, watched practice, asked questions and all that. He’s no different.”

Whether Heard’s injury is serious or not, it comes at a critical time during spring practice. Coach Charlie Strong has said he’d like to pick a starter by mid-April. Heard, who was 4-6 as a starter, completed 57.9 percent of his passes, with five touchdowns and five interceptions.

With Heard sidelined, it creates a two-man competition between Swoopes, a senior-to-be and the former starter, and Buechele, an early enrollee.