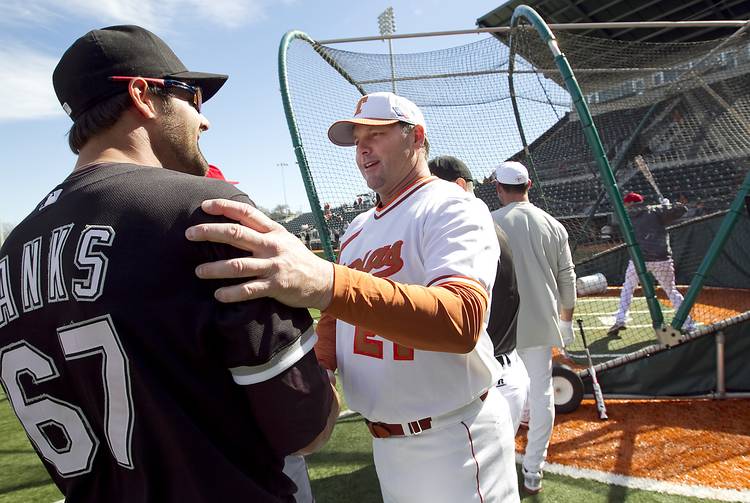 The University of Texas held its annual Alumni Baseball Game at Disch Falk Field Saturday with many former players going up against the current roster of collegiate players in a fun atmosphere. Former player and Major League All-Star Roger Clemens was on hand for the festivities as a guest coach and pitched the first inning. Clemens greets Jordan Danks, of the Chicago White Sox, among other players as they take batting practice. Ralph Barrera/AMERICAN-STATESMAN

Yes, the season started on Sunday, but Monday, a weekday, feels way more like Major League Baseball’s opening day as most of the league is in action, as the parade was held in Cincinnati and Texas’ two clubs start their season.

For Longhorn fans, baseball has been here for a while as Texas is knee-deep in Big 12 games.

But in honor of today, here are six Longhorns who played (or are playing) professional baseball to remember.

Hooton was a three-time All-American pitcher and a 2008 inductee to the College Baseball Hall of Fame. He holds seven Longhorn baseball records, including lowest career ERA (1.14) and lowest ERA for a season (0.88).

As a professional, Hooton was the second pick of the 1971 amateur draft by the Chicago Cubs and made his debut that season.  He pitched from 1971 to 1985, playing for three clubs (Chicago, Los Angeles Dodgers and Texas Rangers). He spent nine years with the Dodgers, winning the 1981 NLCS Most Valuable Player honors as his team went on to win the World Series.

During his career, Hooton won 151 games, recorded 1,491 strikeouts and had a career ERA of 3.38. His Dodger manager Tommy Lasorda nicknamed him “Happy” because Hooton never smiled.

Hooton has since coached at Texas and various spots in the minor leagues, including nearby Round Rock from 2005-2010.

Chalk had the sixth greatest single-season batting average in Texas history at .405 in 1971 and is also sixth all-time overall in career batting averaging at .362.

He went on to be the 10th pick of the 1972 amateur draft by the California Angles. He made his debut in 1973 and went to back-to-back All-Star Games in 1974 and 1975. He spent six years with the Angels, two with the Royals and spent parts of seasons with the Oakland A’s and Kansas City Royals.

In his two All-Star seasons, Chalk had 117 and 140 hits and in 1975 hit 24 doubles. The sure-handed fielder, Chalk played nine seasons in the big leagues.

Moreland’s .410 batting average for Texas in 1975 is the fourth-best mark in school history, his 1974 mark of .399 is eighth-best. He has the third-highest career batting average in Texas history at .388 and seventh all-time in RBI with 183.

Nicknamed “Zonk”, Moreland was taken in the seventh round of the 1975 draft by the Philadelphia Phillies and in 1978 made his debut.

Moreland was member of the 1980 World Series champion Phillies squad and finished 17th in MVP voting in 1985 as a member of the Chicago Cubs. He also played for the San Diego Padres, Baltimore Orioles and Detroit Tigers.

Moreland has been a fixture on radio since retiring in 1989, announcing Texas Longhorns and Chicago Cubs games.

Many consider Clemens one of the, if not the, greatest pitcher to walk on planet Earth. He is undoubtedly the most successful former Longhorn of all-time, possible for any sport. While at Texas, Clemens went 25-7 in two All-American seasons at Texas. He led the Longhorns to the 1983 College World Series title. Clemens once pitched 35 consecutive scoreless innings.

Eventually he became the first player in program history to have his jersey retired.

All downhill after college for the “Rocket,” right?

After being drafted 19th overall by the Boston Red Sox in 1983, here’s what Clemens accomplished:

Clemens went on to one of the greatest professional careers in the history of baseball. An 11-time All-Star, 7-time Cy Young Award Winner, two-time World Series Champion, 5-time MLB strikeout leader and four times he led baseball in wins. He had the lowest ERA in baseball seven times in a 24-year career.

In 1986 Clemens won the American League Most Valuable Player Award as well as the Cy Young. In 2004, at the age of 41, Clemens won the National League Cy Young Award as a member of the Houston Astros, giving him a Cy Young win in both leagues.

Hall of Famer right? Not quite. Performance enhancing drug allegations have crippled his Baseball Hall of Fame chances, but he did receive 45.2 percent of the vote this season.

Swindell was the 1985 Baseball America National Player of the Year for Texas and was 19-2 with a 1.67 ERA and

had 15 complete games. He was a three-time first-team All-American and helped Texas reach the College World Series in 1984 and 1985. He has the top-two single season strikeout seasons in Texas history.

Swindell played for six teams in his career, spending the longest time with Cleveland. He won a World Series title as a member of the Arizona Diamondbacks in 2001 and pitched  2.2 innings during the epic 2001 series against the Yankees. He played one more season before retiring in 2002.

Street is a local product who graduated from Westlake High School.

In 2010, Street was named to the NCAA College World Series Legends Team.

He is the current closer for the Los Angeles Angels.