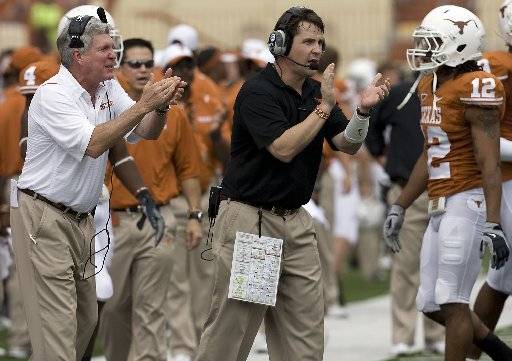 Mack Brown is headed to South Carolina this week to visit his former-coach-in-waiting and defensive coordinator, Will Muschamp.

As we all know, Muschamp’s whole contractual heir apparent deal didn’t work out with the Longhorns.

Brown resigned from UT in December, 2013. Muschamp left the Longhorns to be the head coach at Florida after the 2011 season. He directed the Gators for three seasons, was fired, then coordinated the Auburn defense. Muschamp now has been tasked to revive the Gamecocks after Steve Spurrier’s unexpected retirement.

Brown, who works as an analyst with ESPN, is going to be in the TV booth for South Carolina’s spring game this Saturday.

Muschamp, at a press conference this week, said he hopes Brown will speak to his team after a practice later this week.

“Hopefully he’ll address the team when practice is over,” Muschamp said of Brown. “You learn so much as far as dealing with people. (Brown is) as good a people person as I’ve ever been around.”