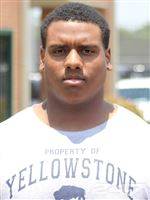 HOW HE GOT HERE: Like the three other Louisianans in this class, Texas defensive line coach Brick Haley — a former LSU assistant — was a real key in landing Wilbon. Texas A&M and LSU also wanted him. Texas offered back in May 2015, and he committed a couple of weeks later. There wasn’t much recruiting drama with this one.

AT DESTREHAN: Starred at noseguard in the Wildats’ 3-4 defense, playing next to defensive end Glen Logan, who signed with LSU. Wilbon was primarily a run-stuffer, but did show some pass-rushing skills (see his best game, below). Earned all-district and all-state honors his senior year.

THE NUMBERS GAME: In his last two years at Destrehan, Wilbon’s Wildcats went 19-0 in the regular season and 25-2 overall. They made it to the Class 5A state championship game. Wilbon didn’t qualify for our Fabulous 55 list of the state’s top recruits, but he did land at No. 43 in the New Orleans Times-Picayune’s Nifty 50 for Louisiana. Wilbon’s been timed at 5.64 in the 40. He wore No. 78 in high school, a number which appears to be up for grabs at Texas.

THEY SAID IT: “He committed early to us, also a good take for inside. But if you are looking at those guys inside, you talk about Wilbon at 327, (Marcel) Southall at 287, and guys at 322, 328, 290, you have big bodies inside now and guys that can hold the point and don’t get moved out of there. And once they get in the system with (UT strength and conditioning) Coach Moorer, they are just going to get bigger and stronger, and then they can really play well inside.” — Charlie Strong, on national signing day

1. Wilbon wears size 17 shoes. For football cleats, he has to go up one size, to 18s. Since it’s not easy to find those shoes at just any store, a couple of years ago the New Orleans Saints stepped up and donated shoes to Destrehan High for Wilbon to wear.

2. Destrehan must have had one of the best defensive lines in Louisiana. With Wilbon manning the middle of a 3-4, LSU signee Glen Logan (6-4, 290) played strong-side end. One opponent, Thibodaux, came into a game last year averaging about 200 yards on the ground and finished with less than 40.

3. Wilbon is close with Destrehan assistant coach Jordan Jefferson, a former LSU quarterback who started for the Tigers in 2011, when LSU fell to Alabama in the BCS national championship game. It was Jefferson who accompanied Wilbon to Texas on an unofficial visit last September for the Rice game.

Felix homers to lift Longhorns to fifth win in a row