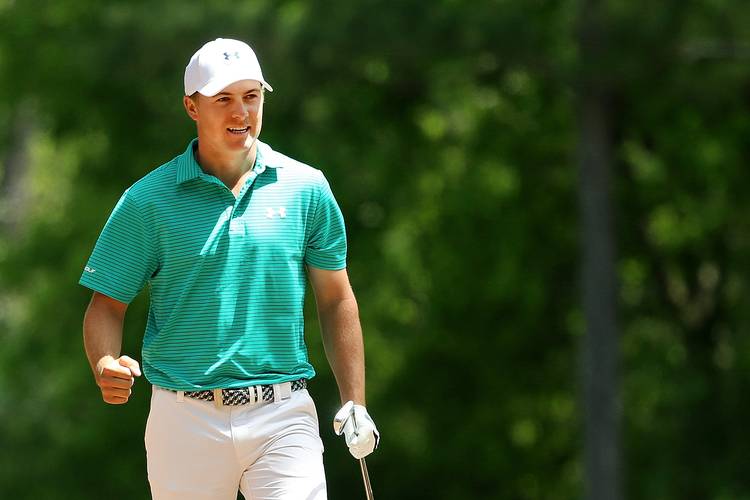 Jordan Spieth of the United States reacts after playing his second shot on the 11th hole during the first round of the 2016 Masters Tournament at Augusta National Golf Club on April 7, 2016 in Augusta, Georgia. (Photo by Andrew Redington/Getty Images)

Former Texas Longhorn and defending Masters champion Jordan Spieth carded a 66 in the first round of the 2016 tourney to take a two-shot lead into Friday’s round. Columinst Kirk Bohls is on sight at Augusta and had the chance of following Spieth for his first round. What was his overall takeaway? That despite a cracked driver, swirling winds and a warning for slow play, “he’s the first-round Masters leader. Of course.”

Here are some of Kirk’s observations from Spieth’s first day:

On Spieth’s first round:

Spieth endured all that, topped off his round with his sixth birdie of the day with a six-footer on 18 and shot an opening round 6-under 66.

Not too bad for a 22-year-old golfer ranked No. 2 in the world, who was delighted with his bogey-free round despite what he called “average ball-striking” on a gorgeous but wind-shaping first round. Hopefully, he can work out these, uh, kinks in his game.”

What would be able to throw off Spieth’s game?

“Little has changed from last April, when Spieth walked off the 18th green as the first wire-to-wire winner since Ray Floyd in 1976. Why would anyone expect anything differently? One might assume Spieth will have a poor round some day if he gets the mumps or misses his tee time or switches to boxing.

“You know it’s inevitable,” said his father, Shawn, who walked the round with his wife, Chris. “I guess. Maybe it’s not.”

On what Spieth’s playing partner said after the round:

“It’s like playing with Tiger or a Phil (Mickelson),” Casey said. “Jordan just exudes whatever that is. Something different, something cool. It’s a knowing, it’s a confidence. It’s the way he walks, the way he stands, the way he speaks, the way he shakes your hand and the way he deals with people. It’s wonderful.”

For Kirk’s entire column on the first day of The Masters, click here.