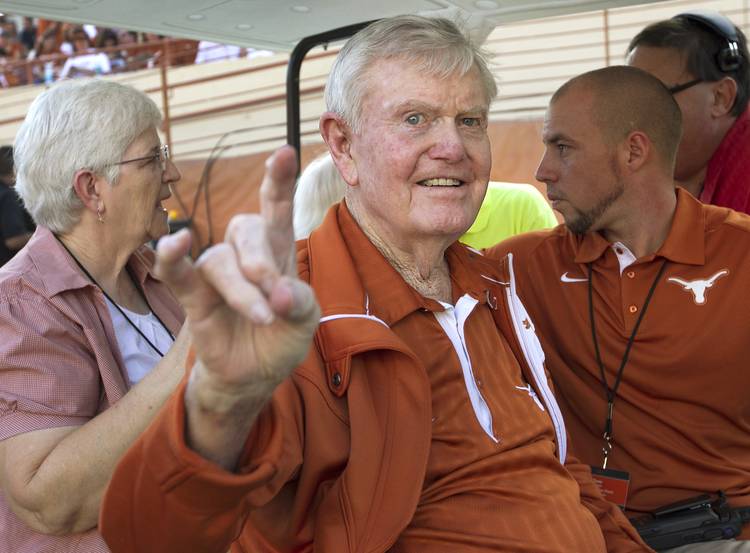 Kirk Bohls is currently in Augusta, Ga. following Jordan Spieth to see if he can claim back-to-back Masters titles. On Tuesday, he took a look at Spieth’s chances for a repeat. He’s also posting morning and afternoon blogs on all things green-jacket tinged at Augusta National. On Wednesday, he took a look at legendary Texas football coach Darrell Royal’s relationship with the historical golf club and investigated whether Royal really did turn down a membership to the club. Some highlights from his column:

On how Royal was offered a membership to Augusta National:

“The offer to join was first brought to Edith’s attention by Dallas car dealer Finley Ewing, a prominent Texas grad and close friend of the Royals. He and several pals had volunteered to pick up the price of the Augusta membership and annual dues.

“That’s true,” said Ewing’s son, Fin, who is the playoff committee chairman for the Cotton Bowl. “Edith would know. I do remember Dad and a couple of other guys were going to pay for Darrell’s membership. At some point, Darrell was probably a scratch golfer.”

On how Royal turned down membership:

“Well, actually, Edith (his wife) turned it down for him because she didn’t think they could afford the trips there. Royal didn’t know he’d even been extended an invite until years later in the 1980s.

“He wanted to kill me when he found out I turned it down,” Edith said, laughing at the recollection.

Which is exactly why she didn’t tell him immediately.”

On why Edith turned it down:

“Edith declined the offer largely because they didn’t have access to a private jet. Former Longhorn and controversial copper and gold mining tycoon Jim Bob Moffett used to ferry the Royals around on his private plane, but Edith said Darrell was always too proud to ask such favors.

“We didn’t have a plane,” Edith said. “Darrell wouldn’t have asked anyone to fly him anywhere. He always waited until they volunteered. I just didn’t think he could afford to be a member.”

For the entire column, including how Royal became such an avid golfer and how he kept record of every round he played, click here.