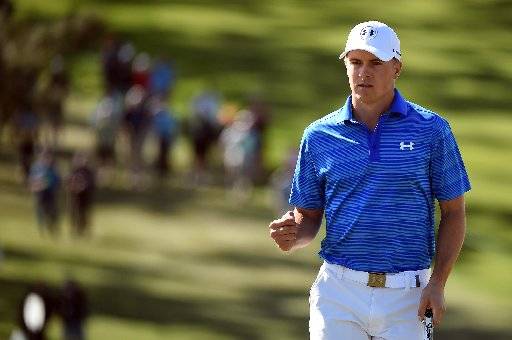 AUGUSTA, GEORGIA - APRIL 10: Jordan Spieth of the United States reacts to his birdie on the ninth green during the final round of the 2016 Masters Tournament at Augusta National Golf Club on April 10, 2016 in Augusta, Georgia. (Photo by Harry How/Getty Images)

Jordan Spieth’s quest for a second green jacket is off to a solid start. Spieth birdied four straight after a bogey on the par-4 fifth hole and holds a five stroke lead over Danny Willet at 7 under par with nine left to play.

He opened with a par on the tough par-4 first and followed with a birdie on the par-5 second.

After the bogey on the fifth, he drained a 12 foot putt on the par-3 sixth and then hit his second shot on the par-4 seventh within two feet.

Here’s a look at the shot:

His 32 on the front nine matches his best score in 12 rounds at the Masters. Pretty awesome start.