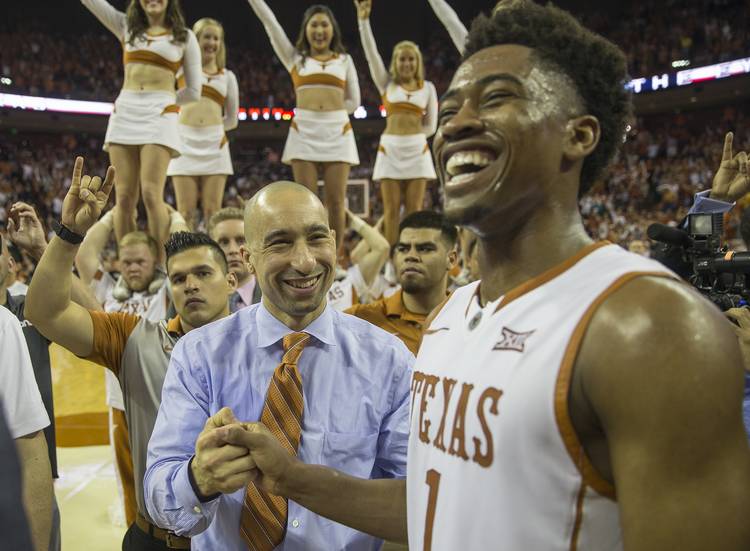 Texas's Head Coach Shaka Smart celebrates a win with zisaiah Taylor against Oklahoma during the second half of an NCAA men's college basketball game at the Frank Erwin Center in Austin, Tex., Saturday, Feb. 27, 2016. RICARDO B. BRAZZIELL/AMERICAN-STATESMAN

Don’t expect Texas coach Shaka Smart to push Isaiah Taylor one way or the other. Should the junior guard stay in school or go whole hog into the NBA draft?

“That’s his decision. That’s his choice,” Smart said Monday in his first comments since Taylor announced he was exploring his draft options.

“It’s easy to say here’s what I would do,” Smart added. “I support Isaiah. He’s been terrific. He’s had a great attitude. He’s been huge for this program for three years, not just the one year I’ve been here. I’m appreciative of him.”

Taylor is taking advantage of new NCAA rules, enacted in January, that allow players more time to determine their draft status. Taylor has announced he is not hiring an agent at this time, protecting his amateur status.

Taylor could go through some NBA workouts, talk to team personnel and determine that leaving is best. In three seasons at UT, Taylor averaged 13.6 points, shot 40.4 percent and averaged 4.5 assists per game.

Or, Taylor could find that returning for his senior year is wise. Oklahoma’s Buddy Hield and Iowa State’s Georges Niang both returned for their senior seasons and became two of the Big 12’s best.

“I think that knowledge is power, and unlike baseball and even hockey, our system in the past has made it very, very difficult for these guys to have just accurate information,” Smart said. “I think this is a step in the right direction from a players standpoint.”