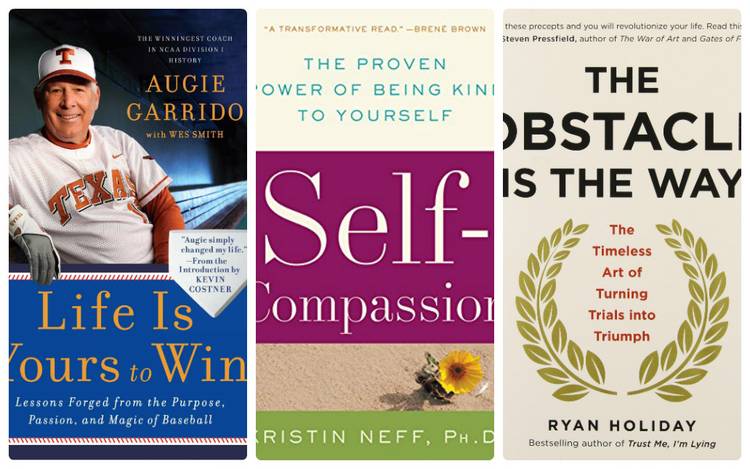 Want to read up on books liked by Texas coach Shaka Smart? Here are three titles he gave to UT faculty members on Monday.

If that’s indeed true, Texas coach Shaka Smart is consumed with thinking about becoming a better person inside and out.

Speaking to UT faculty members on Monday, Smart began his presentation by giving away three books. Whoever could correctly answer some relatively easy UT basketball trivia questions would walk out with a prize.

Well, turns out the only real winner Monday was literacy. The faculty needs to brush up on Longhorns’ hoops history.

Question No. 1: Who was the team’s defensive MVP this season?

Faculty members looked around, and it was obvious there were question marks aplenty sprouting over their heads. Led the team in blocks? Named the Big 12’s defensive player of the year? Anyone?

The prize: Life is Yours to Win, by Augie Garrido. Published in 2011, the Texas baseball coach went into great detail about the importance of a winning mindset both in the individual and the team.

Question No. 2: Who was UT’s last academic All-American?

Smart helped the group with some hints. He’s in the NBA currently. Left the Longhorns in 2008. Drafted by Charlotte in the first round? Anyone?

Somewhere from someone sitting to Smart’s right figured it out: D.J. Augustin

The prize: Self-Compassion, by Kristin Neff. The associate professor in UT’s College of Education offers expert advice on how to limit self-criticism and its debilitating effects on one’s personal outlook.

Question No. 3: It turns out there was no third question. Seeing as how the questions got progressively more difficult, Smart passed on a third question and outright awarded the book to Andrea Gore, chairwoman of the UT faculty council.

Since there was no third question, let’s pose one here for fun. Name the last UT scholarship player from the Austin area?

The prize: The Obstacle is the Way, by Ryan Holiday. Holiday, who currently lives in Austin, examined how some of the most famous people in history — John D. Rockefeller, Amelia Earhart, Steve Jobs, etc. — turned problems into advantages.