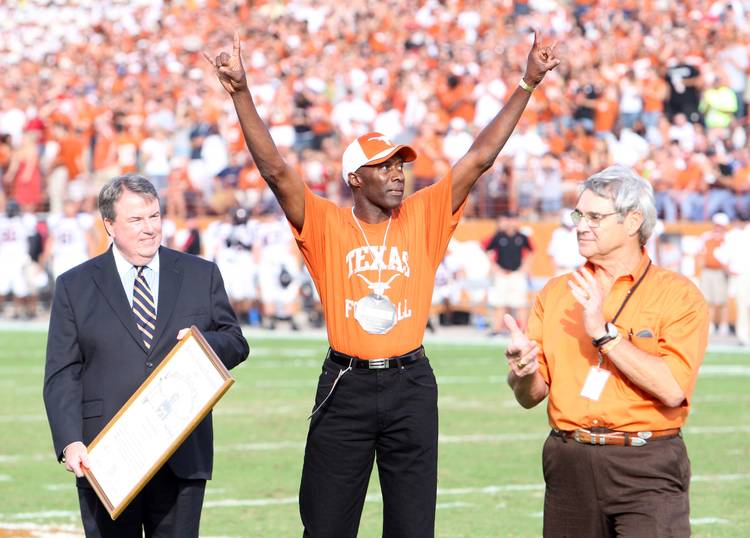 Hand out photo courtesy of the University of Texas Athletics Department of Johnnie Johnson, honored as the 14th Longhorn player to be inducted into the National Football Foundation College Football Hall of Fame. Johnson received his honor during the UT v. Texas Tech game in early November, 2007. Credit: Jim Sigmon/UT. Received 12/03/07.

Hampton is one of three Longhorns taken No. 19 overall and is by far the best professional to be taken No. 19 who hailed from Texas. Hampton’s Hall of Fame caliber career with the Steelers last 12 seasons and generated five Pro Bowl appearances, two Super Bowl wins and the status of one of the best defensive tackles to play in the Steel City.

At Texas, Hampton was a consensus All-American in 2000, teaming with Shaun Rogers to form one of the best defensive tackle tandems in Texas football history. He is a member of University of Texas Hall of Fame.

Stephens was the sixth player taken in the second round, but 18th overall. He played eight years in the NFL, with his longest tenure being five seasons with the Dallas Cowboys.

At Texas, Stephens was a All-Southwest Conference team selection as a senior and was also a pitcher on the baseball team.

Johnson played 10 seasons, mostly with the Rams (he split his final season with the Rams and Seattle). In that time, Johnson had 22 interceptions and helped the Rams to the playoffs seven times.

At Texas, Johnson was a two-time consensus All-American in 1978 and 1979 and had 13 interceptions in four seasons.

Mike Ruether was also taken 17th overall in 1986 and played eight seasons in the NFL. Ruether

Clayborn was a 3-time Pro Bowler during his 15 year career. He played 13 seasons for the Patriots, helping them to a Super Bowl XX appearance in 1985, the same year he had a career-high six interceptions and made the Pro Bowl. Clayborn finished with 36 career interceptions, which is a Patriots team record.

It may be a stretch to classify Johnson as a “Hall of Fame caliber” player, but he is one of the greatest linebackers to ever play in Kansas City. Johnson is a four-time Pro Bowler and was a second-team All-Pro selection in 2015 at the age of 33. He was also a first team All-Pro in 2011.

He has a 820 career tackles and 26. 5 sacks. Johnson returned two interceptions for touchdowns in 2009, which tied and NFL record.

In 2013, Kenny Vaccaro was drafted 15th overall by the New Orleans Saints.

Funny story about this pick. At the time, Seattle was welcoming a new coach, Pete Carroll, who had been the massively successful coach at Southern California. In Carroll’s final season he coached a talented safety named Taylor Mays who many felt was one of the best players in the draft prior to that college season. Mays’ final year at USC was ho-hum and his draft status dropped. But when Seattle hired Carroll and the Seahawks were in need of a safety, many just assumed Carroll would draft Mays, including Mays.

Instead, Carroll and the Seahawks drafted one of the organization’s all-time best players and currently the league’s best safety, Earl Thomas.

Looking back at articles written in 2010 is probably why the internet was made, because a lot of people look foolish for writing things like this.

And it almost looks like a joke now that Pete Carroll had to defend this pick.

Because…Thomas is the centerpiece of the “Legion of Boom” defense and is a 5-time Pro Bowler and 3-time first team All-Pro as well as a Super Bowl champion. Thomas has 383 tackles in five years and 21 interceptions and has never missed a Pro Bowl.

Taylor Mays, meanwhile, was drafted No. 49 overall by San Francisco and has played for three organizations and was cut by several others. Only the Cincinnati Bengals still believe in Mr. Mays.

At Texas, Thomas was a consensus All-American in 2009 and played two seasons for the Longhorns. His 17 pass breakups as red-shirt freshman in 2009 is a Longhorn freshman record.

Five Texas players have been drafted 13th overall. Brian Orakpo was taken 13th by the Washington Redskins in 2009, and he’s been to three Pro Bowls in career. He now plays for Tennessee.

He’s second all-time in NFL punt returns for touchdowns with 10.

In college, Metcalf was the 1987 Southwest Conference Player of the Year and a second-team All-American. He is the only player in Texas history to lead the team in all-purpose yards for four straight seasons and holds just about every running back receiving record the school has. He was also a track and field standout who set the Texas long jump record and competed in the 1988 Olympic Trials.

McFadin was a five-time Pro Bowler and three-time All-Pro selection. He  also played in the AFL with the Houston Oilers and Denver Broncos before retiring in 1965.

In 1983 McFadin was inducted into the College Football Hall of Fame. He was a 1950 All-American at guard for Texas.

Three Texas players have been taken 10th overall, but none since 1956. Max Bumgardner’s name sticks out, so we’ll focus on him since all these players (Tom Stolhandske and Menan Schriewer) played very little in the NFL. Bumgardner played one season in the NFL, same with Stolhandske. Schriewer was drafted by the Bears, but he never played for them, instead he spent from 1956-1962 playing in Canada.

Schriewer is a member of the Longhorn’s Hall of Honor and was All-Southwest Conference in 1955.