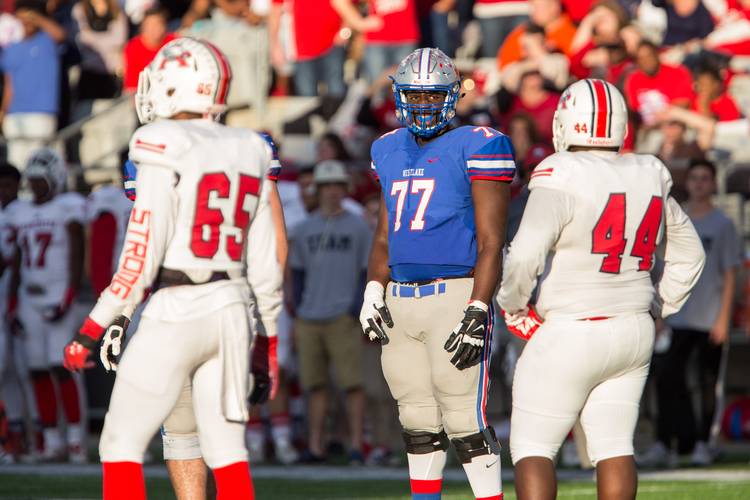 54. Brenden Jaimes, OT, Lake Travis (6A), 6-5/250 Undecided — always looks to end a play on the ground. Give him a couple of years and he’ll fill out into a legitimate Division I tackle.

52. Major Tennison, TE, Bullard (4A), 6-6/245, Committed to Texas — undersized defensive backs have little chance of shedding Tennison’s blocking. He’s also capable of stretching the middle of the field in the vertical passing game.

49. Will Farrar, G, Fort Bend Travis (6A), 6-5/290 Undecided — plays tackle for his high school team, but his wide-frame is better suited for the interior. Has offers from Texas, LSU and Michigan State.

48. Stephan Zabie, OT, Westlake (6A) 6-5/290, Undecided — a little raw, but just this month Florida, Oklahoma and Baylor have extended offers to make him their project

47. Saiid Adebo, ATH, Mansfield (6A), 6-0/180, Undecided — tough call as to whether he’s wired better for receiver or as a ball-hawking cornerback.

46. Kennedy Brooks, RB, Mansfield (6A), 6-0/197, Undecided — his speed looks to be just OK, but that might be deceiving because no one can catch him in the open field.

44. Montrell Estell, WR, Hooks (3A), 6-2/180, Undecided — dominates small-school opponents; probably more talented as a defensive back and returned three of his six interceptions in 2015 for a touchdown.

42. Kobe Boyce, CB, Lake Dallas (5A), 6-0/163, Committed to Texas — unknown until he picked up offers from Texas A&M and Texas on consecutive days this month. His coverage skills are unrefined, but he’s got a high ceiling.