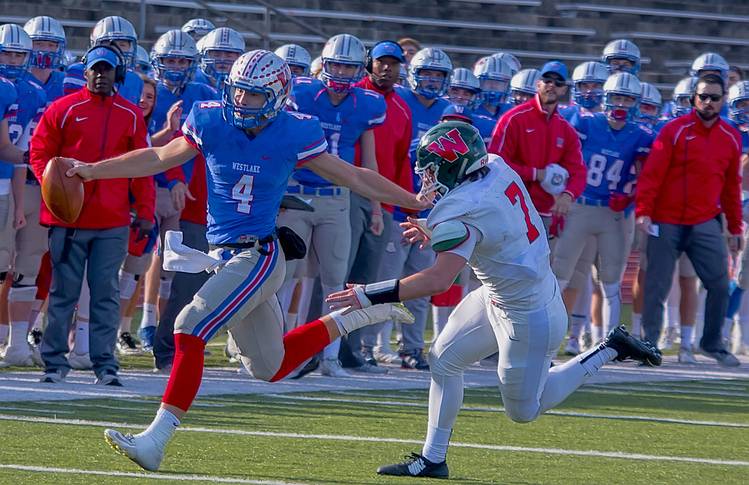 Westlake's Sam Ehlinger (4) carries the ball for another first down before being pushed out of bounds by Woodlands middle backer Ian Harris (7).

On 2017 quarterback commit Sam Ehlinger’s thoughts on competing for the starter’s job when he gets to the 40 Acres:

“At least one very interested party in the crowd of about 20,000 at the Orange-White Game, or Half, last Saturday came away impressed with true freshman quarterback Shane Buechele. “Shane had a very, very good day,” Westlake senior-to-be quarterback Sam Ehlinger said in a text Tuesday. “I look forward to having the opportunity to get to compete against him.” Asked if a strong year by Buechele could change his commitment to Texas, Ehlinger texted, “No, competition is good wherever you are.” Ehlinger is one secure, confident young man.”

On the three Horns who made the most progress in the spring on defense:

“Defensive coordinator Vance Bedford told me the three Horns who made the most progress are new strongside defensive end Charles Omenihu, tackle Poona Ford and linebacker Anthony Wheeler. “Charles has gained 15 pounds, and it showed,” Bedford said. “He played more physical than he did last season. Poona is a technician of the game. He is a detailed player who does the little things right. Wheeler is a throwback backer who loves the game. You can see his growth since last season. He is one of our better tacklers.”

On change-of-pace running back Roderick Bernard and safety Kenny Vaccaro:

“I see running back Roderick Bernard as a real plus and a terrific change-of-pace to the two bruisers. “He’s fast, shifty,” offensive coordinator Sterlin Gilbert said. Look for him to have a big role this fall. Strong raved about sophomore safety Kevin Vaccaro, calling him “as tough as any guy I’ve been around.”

For the rest of Kirk’s 9 things including his thoughts on Chris Warren, Alabama’s spring game and his conversation with Ben Crenshaw on what happens next for Jordan Spieth, click here.