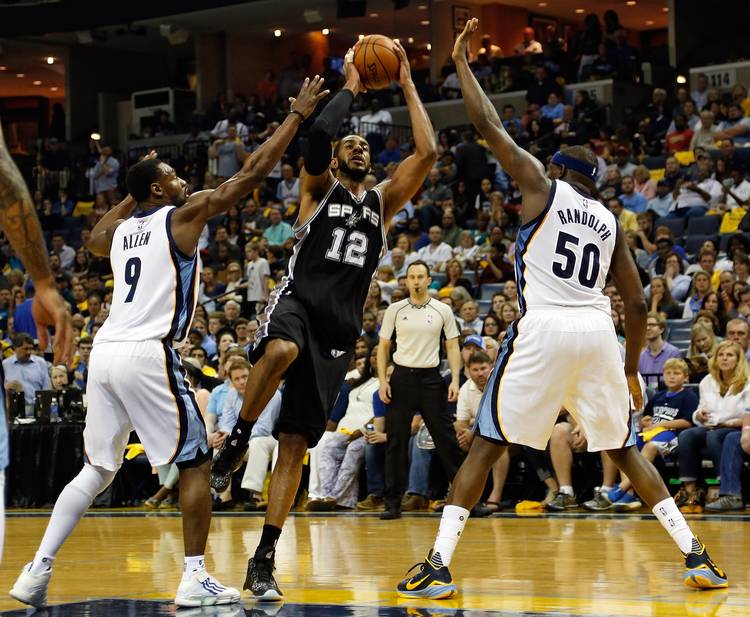 LaMarcus Aldridge #12 of the San Antonio Spurs takes a shot between Tony Allen #9 and Zach Randolph #50 of the Memphis Grizzlies during the second half of game three of the Western Conference Quarterfinals during the 2016 NBA Playoffs between the San Antonio Spurs and the Memphis Grizzlies at FedExForum on April 22, 2016 in Memphis, Tennessee. (Photo by Frederick Breedon/Getty Images)

Six out of eight Longhorns in the NBA are competing in the playoffs, trying to make their run to the championship. Here’s how they did in the second week of playoff action.

Kevin Durant, F, Oklahoma City Thunder: Since we last checked in with the All-Star, he’s led the Thunder to three wins in a row over the Dallas Mavericks to advance to the second round of the playoffs where he’ll face another Longhorn in the NBA, LaMarcus Aldridge. Durant scored 34 points in the Game 3 win over the Mavs before his streak of games scoring at least 20 points came to an end in Game 4 in which he scored 19. Before that he’d scored at least 20 points in 67 straight games, including the playoffs this year. His regular season streak remains intact at 64 games. He scored 33 points and pulled in 7 boards in the closeout game on Monday. He’ll take on the Spurs beginning on Saturday.

LaMarcus Aldridge, F, San Antonio Spurs: Aldridge will most definitely play more minutes in the upcoming series with the Thunder than he did in the Spurs’ sweep of the outmanned Memphis Grizzlies. Aldridge ended the series with two straight double-double performances. He had 16 points and 10 rebounds in the Game 3 win on Friday and followed it up with a 15 point, 10 rebound performance in Game 4. Aldridge played just 26 minutes in the closing game, but he’ll most likely be needed for much more than that against Oklahoma City.

Myles Turner, F, Indiana Pacers: His 15 points and 9 rebounds on Friday night helped the Pacers force a Game 7 against the Toronto Raptors. Turner also had four blocks in the game. His Pacers blew a chance to go up 3-2 on Tuesday in a game which he scored 14 points and pulled down 8 boards to go along with 3 blocks. In his first trip to the playoffs he’s shooting 52 percent while averaging 11.3 points per game, 6.5 rebounds and 3.2 blocks.

Cory Joseph, G, Toronto Raptors: Joseph was on the losing end of the contest with Turner on Friday night. He scored 15 points and was 3 for 3 from 3-point range. In Tuesday’s big comeback win he had 8 points and 3 boards. He’s averaging 11.2 points in the playoffs while shooting 61 percent.

Avery Bradley, G, Boston Celtics: The Celtics definitely missed him after he went down with a hamstring injury in the first game of the series with the Atlanta Hawks. Boston was eliminated on Thursday night, the fifth straight game Bradley missed due to the injury.

Tristan Thompson, F, Cleveland Cavaliers: He was quiet in the first two games of the series with Detroit, but he nearly scored a double-double in Game 3. He had 8 points to go with 10 rebounds in last Friday’s 101-91 win. He played big minutes (38) in Game 4, but had a mediocre game of 5 points and 5 rebounds. He and the Cavs are set to host the Hawks on Monday.