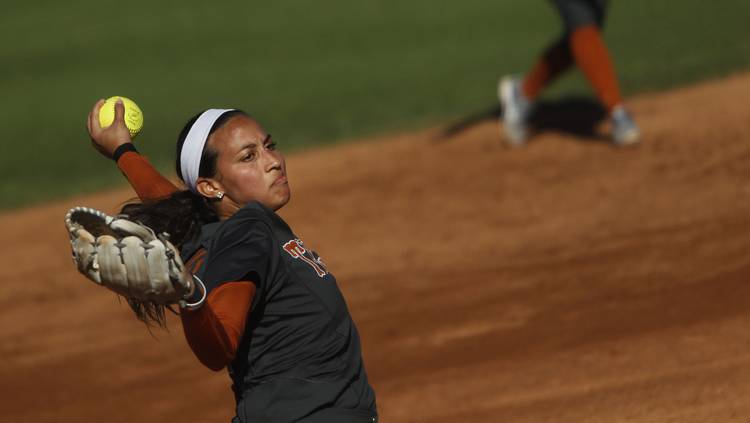 The Texas softball team split a doubleheader against Kansas on Saturday, winning the first game 3-1 before being run-ruled by the Jayhawks 9-1 at McCombs Field.

UT’s Tiarra Davis threw a complete game and limited the Jayhawks to one unearned run on three hits with seven strikeouts in the opener.

Texas freshman Reagan Hathaway drove in two runs in the opener, and teammates Celina Felix went 2 for 3 with an RBI.

Felix knocked an RBI single in the first inning and was moved to third on a base hit by Paige von Sprecken. Hathaway followed with a sacrifice fly that gave Texas a 2-0 edge.

Hathaway put Texas up 3-1 in the fifth when she hit a two-out double that scored Stephanie Wong.

Chaley Brickey led off the game with a solo homer, and Harli Ridling sparked the rally in the third with a three-run homer. After a single, Clark gave up a two-run homer to Jessie Roane that put Kansas up 6-0.

Clark was pulled after Roane’s homer and von Sprecken took the mound. Kansas loaded the bases after a couple singles and a walk and Shannon McGinley stretched the lead to eight with a two-run single.