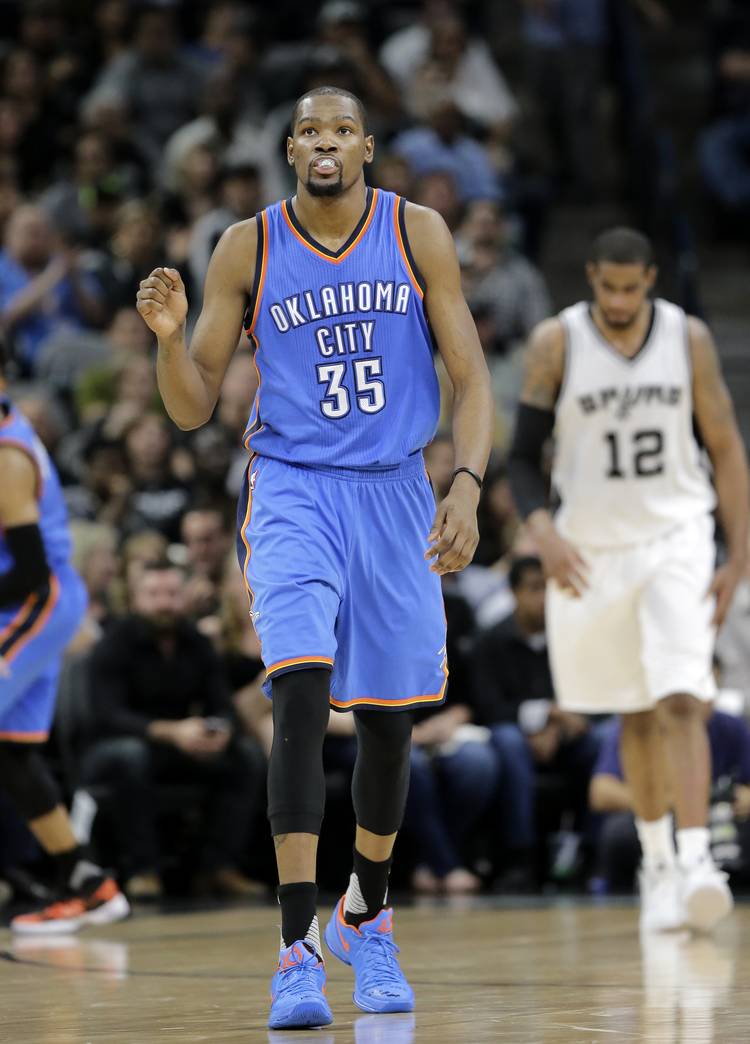 There are four Longhorns in the NBA playoffs left, trying to make their run to the championship. Here’s how they did, along with another Longhorn who was knocked out of the first round, in the third week of playoff action.

Kevin Durant, F, Oklahoma City Thunder: Durant has only played in two games since we last checked in on him and boy were they worlds apart. The Thunder were simply obliterated by the San Antonio Spurs in Game 1 of the Western Conference semifinals 124-92. Durant scored just 16 points on 6 of 15 shooting. It was his lowest playoff point total since he scored 15 on May 21 of 2014 against the Spurs. He had 8 rebounds and 6 assists in Saturday’s game, but he also had a plus/minus of minus-31. Monday’s game was much better for Durant and OKC as he scored 28 points and the Thunder held on to win 98-97 in a wild finish. He added 7 rebounds and 4 assists in the game. Despite the Game 1 blowout, he must be happy with the split heading back to Oklahoma City for Game 3 on Friday.

LaMarcus Aldridge, F, San Antonio Spurs: Though the Spurs dropped Game 2 to the Thunder, it wasn’t because of the way Aldridge played. He’s been a terror for the Thunder in the first two games, scoring 79 points in that brief span. He had 38 in the Spurs’ blowout win and then put up 41 in the Game 2 loss. The Thunder clearly have no defensive answer for him as he’s shooting a whopping 74.9 percent in the series. He’s even 2 for 2 from beyond the arc with his second of the series setting up the Spurs’ last chance at victory in Game 2.

Cory Joseph, G, Toronto Raptors: He scored eight points in the Raptors’ closeout win over the Indiana Pacers on Sunday. He shot 50 percent and had four assists in the 89-84 victory, which featured another former Longhorn Myles Turner. In Toronto’s Game 1 loss to Miami he scored 10 points and had three rebounds and two assists. Eight of his points came in the fourth quarter of the 102-96 overtime loss. In Thursday’s Game 2 overtime win he had eight points and four assists with the best plus/minus of any bench player at plus-10.

Myles Turner, F, Indiana Pacers: All in all he had a great rookie season, averaging 10.3 points, 5.5 rebounds and 1.4 blocks per game. Unfortunately, his season ended on a sour note as he went just 2 for 11 in the Pacers’ Game 7 loss to the Raptors. He finished the game with four points, six rebounds and four blocks.

Tristan Thompson, F, Cleveland Cavaliers: Thompson is doing what’s asked of him, though it’s not translating to big offensive numbers. He has just 13 points in his last two games combined, but he’s also hauled in 21 total rebounds. He had a plus/minus of plus-16 in the Cavs’ Game 1 win over the Atlanta Hawks on Monday and a plus-18 in Wednesday’s victory.

WATCH: How former Texas running back Jeremy Hills trains Longhorns in the NFL