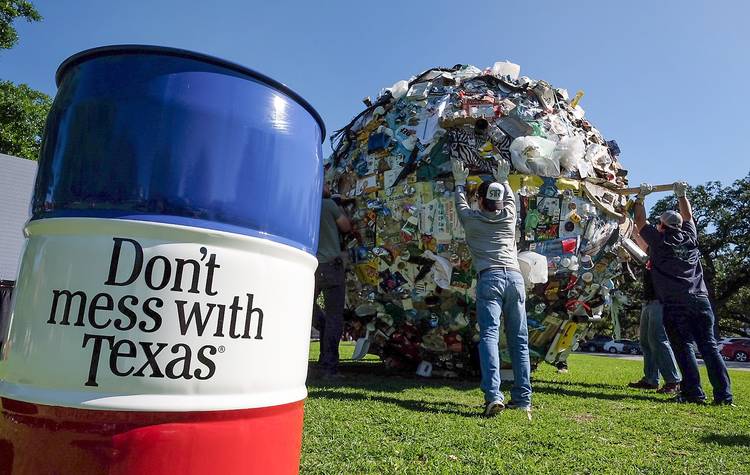 April 29, 2015 - The crew from Blue Genie Art Institution, based in Austin, pieces together a 12-foot ball of trash for the Texas Department of Transportation "Don't mess with Texas" litter campaign event held on the south lawn of the State Capitol on Wednesday, April 29, 2015. (Rodolfo Gonzalez / AUSTIN AMERICAN-STATESMAN) FOR April 3: Our anti-litter campaign slogan has taken on more meaning over the years.

In April, the Lone Star State celebrated the 30th anniversary of the greatest PSA advertising campaign ever. They told litter-bugs “Don’t Mess With Texas.”

But “Don’t Mess With Texas” can sometimes go beyond littering. Case in point, I remember walking through the streets of Columbus, Ohio in 2005, and a Buckeye fan walking to the Ohio State-Texas football game was wearing a shirt with an upside down Texas logo with a tag line underneath reading “Messed With It.”

How did that end, Buckeye fan? It ended in arguably the most heartbreaking way any game has ever ended in Ohio Stadium.  Don’t mess with Texas. (Side note: my brother wept on my shoulder that night exclaiming that he’ll never return to Texas after that loss. He lives in Cedar Park now).

So how does this have anything to do with the NBA Draft? Last week the NBA did not invite Isaiah Taylor to its draft combine, this after Taylor left Texas early and a week after Taylor ended his amateurism and hired an agent.

It’s not  just the Taylor thing, but we’ll get to that.

Taylor wasn’t a lock by any means to get drafted this June. He hasn’t popped up on many credible, if there are such things, NBA first round mock drafts. His flaws are glaring (he’s not the best shooter) but his strengths are also (he’s fast, is a strong assist man and is a very solid defender) wanted by the league. There are a lot of reasons why he should have been one of the 63 players in the combine (especially since the NBA posted a press release saying “more than 70 players were invited to the combine” but listed 62 players), but at the end of the day,  it appears that there are too many guards entering the draft and the league is, apparently, drawing a line.

Here’s the funny thing though: Taylor was a first team All-Big 12 guard this past season and the leading scorer for the Longhorns. He played 30.9 minutes per game and averaged 15 points and five assists.

Meanwhile, Kansas freshman Cheick Diallo averaged 3.0 points per game and played 7.5 minutes per game. The 6-foot-9-inch forward with never-ending arms entered college basketball last season as a possible future top-10 pick, and just plain flopped for the Jayhawks. The NCAA made him miss the first month of the season due to an academic clearance issue, but he never blossomed once he got on the court.

Diallo was invited to the combine, and there was never really any doubt he wouldn’t be.

So how much does college basketball even matter to the NBA? Obviously very little, because based on Taylor’s play, he deserved to be in Chicago.

Just because he’s not invited doesn’t mean Taylor won’t get drafted. It just doesn’t help, considering the combine doesn’t include the 10-15 international players who will likely be drafted. That means roughly 45-50 college players will get drafted, and most, if not all, were poked and prodded at the NBA combine and seen head-to-head against other players by general managers and coaches.

Taylor’s hope is that he kills his individual workouts he’ll likely hold for teams. Considering the possible No. 1 pick is doing the same thing, skipping the combine might actually be a good thing for Taylor as he’ll get all the attention.

Maybe he can pull off a Carson Wentz-like pro day.

So I could have picked a number of players to compare with Taylor and why it’s weird he didn’t get a combine invite, why did I choose Diallo?

Because it’s time to write about the recruitment of Jarrett Allen, and it’s time to explain why the NBA draft process is “Messing With Texas” and then I can drop the mic and wait till next Monday’s Jarrett Allen update.

Allen refuses to believe those sources close to him that say he’s no longer considering the Kansas Jayhawks:

Kansas is still on my list.. I'm not sure where that came from.

Why is he not dropping Kansas yet? Who really knows?

Maybe he really likes sunflowers and wheat. Or maybe it’s because Kansas and coach Bill Self do two things very often: win games and send big men to the NBA (Kansas has a former power forward or center on three of the remaining NBA playoff teams).

But here’s what could be holding up Allen’s commitment: Diallo.

Diallo is heading to the combine. But as of Monday, he’s not hired an agent, so he could return to college.

“But Joe, if Diallo has spent the last month and-a-half preparing for the combine in South Carolina, how could he return to Kansas and be academically eligible next season?”

Glad you asked, because the Kansas City Star answered that question.

Where does the NBA draft process fit in?

A year ago there would be no guessing. Diallo would be long gone.

The NBA and NCAA adjusted their draft rules to allow prospects till mid-May to hire an agent and decide to be in the draft. The old rules had a timeline that didn’t allow players to go to the combine and see where they would get drafted. Players like Taylor probably should have waited to hire an agent until after the combine invites were released (unless he was just ready to move on), but players like Diallo, who was a top-10 recruit out of high school, can garner an invite based on potential and he can see if he’s going to be a first round pick, which no one can really project right now.

Allen could be committed right now to Texas, Kansas or Houston, or close to a commitment if the NBA draft declaration period was over. Could. There would be no possible reason to wait, unless of course the Houston Rockets and reporters float Self and Texas coach Shaka Smart’s name out there as their new head coach, like they did last week.

But the draft declaration period is not over, so players like Allen, Marquise Bolden of Desoto and a number of transfers and graduate transfers are waiting to see how the next two weeks unfold.