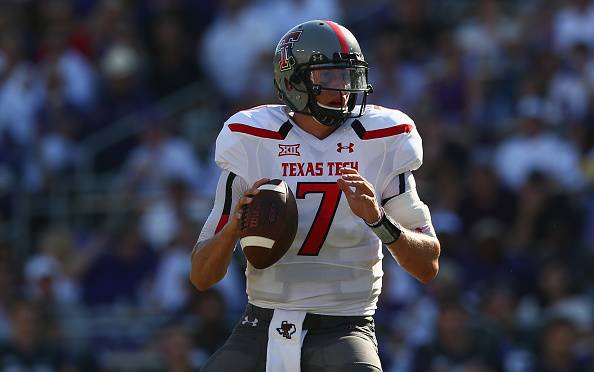 FORT WORTH, TX - OCTOBER 25: Davis Webb #7 of the Texas Tech Red Raiders throws the ball against the TCU Horned Frogs at Amon G. Carter Stadium on October 25, 2014 in Fort Worth, Texas. (Photo by Ronald Martinez/Getty Images)

Former Texas Tech quarterback Davis Webb could be manning the California offense when the Longhorns head to Berkeley in September.

After committing to Colorado in January, Webb changed his mind this week and decided to enroll at California.

Plus, Cal is coached by Sonny Dykes, who played both football and baseball for Texas Tech. And his dad, Spike, is a former Tech head coach and program icon.

The younger Dykes was co-offensive coordinator at Tech, serving alongside Dana Holgorsen, who now is the head coach at West Virginia. Spavital is a Holgorsen protege.