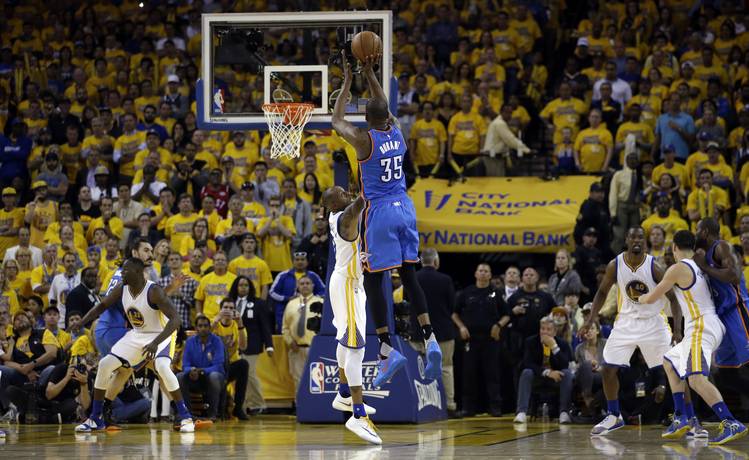 Kevin Durant, F, Oklahoma City Thunder: Durant and the Thunder pulled off a shocking win in Game 1 of the Western Conference finals as Oklahoma City defeated Golden State 108-102 on Monday night. Durant scored 26 points to go along with 10 rebounds for his first, surprisingly, double-double of the playoffs. He also had three assists and three steals in the win. His clutch shot with 30.7 seconds left in the game put the Thunder up five and allowed them to hold on to the win, an uncalled Russell Westbrook traveling violation notwithstanding. Durant shot 61 percent and scored 29 points in Game 2, but the Warriors bounced back in a big way, winning by 27, to even the series at one game apiece.

Tristan Thompson, F, Cleveland Cavaliers: Thompson’s Cavs have won 10 in a row, including Thursday night’s 108-89 victory over the visiting Raptors for a 2-0 lead in the Eastern Conference finals. Thompson scored six points and secured seven rebounds in Game 1 and followed that up with 9 and 12 in Game 2. He leads all remaining players in the playoffs with 4.7 offensive rebounds per game.

Cory Joseph, G, Toronto Raptors: Joseph and the Raptors have had a terrible time trying to slow down the Cleveland Cavaliers. Losing by 31 in Game 1 on Tuesday and 19 in Game 2 on Thursday doesn’t bode well for the team from up north. Joseph scored four points and had three assists in Game 1, while pitching in 11 points, five rebounds and three assists in Game 2. The good news is the Raptors return home to host two games where they can tie the series if they hold court. For Joseph’s sake, you can hope he doesn’t get abused by this behind the back crossover from Kyrie Irving too often.