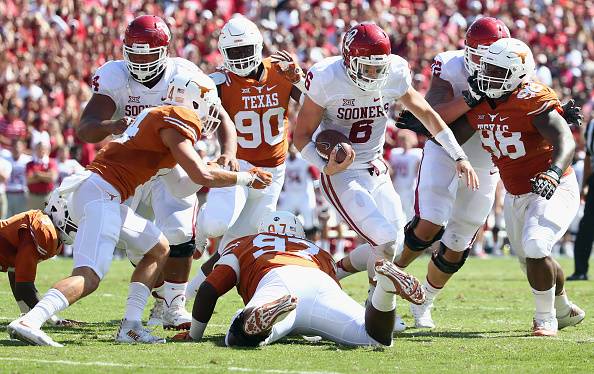 As you may have heard, Texas is probably going to break in true freshman Shane Buechele to be its starting quarterback this fall. Though not ideal to throw a rookie into the fire so quickly, Buechele looked in the spring to be superior to veterans Tyrone Swoopes and Jerrod Heard.

While Texas gets ready to roll the dice with a newbie, all of its opponents are going to open the year with a quarterback with at least one start to his resume. In fact, the 12 presumptive QB starters Texas will face have 127 combined starts, including 20 by Oklahoma’s Baker Mayfield.

With former Texas Tech QB Davis Webb announcing his transfer to Cal this week, Texas now has a clear idea which quarterback against each of its opponents.

Here’s how we ranked them:

Most lists like this wouldn’t have Rudolph in the top spot, but it says here the junior is good enough to leave school early and be a first-round pick next year. Though he beat Texas last year, Rudolph was intercepted twice including for a touchdown by Holton Hill.

He’ll no longer be throwing the ball to second-round draft pick Sterling Shepard, but Mayfield can still turn around and hand the ball off to dynamic backs Samaje Perine and Joe Mixon. Mayfield, a Lake Travis grad who has made it clear he doesn’t like Texas, will be looking for revenge after he was bruised and battered in last year’s Texas upset.

Mahomes is the lone member returning from a superb QB-RB-WR trio that also included 1,400-yard rusher DeAndre Washington and 1,200-yard receiver Jakeem Grant. In two starts against Texas, Mahomes has recorded one win, one TD throwing, one TD running and one concussion.

ESPN.com calls Kizer vs. Zaire the top quarterback battle in college football. For now, give the edge to Kizer, who took over in week two after Zaire went down with a season-ending injury. In his first extended appearance, Kizer piloted the Irish to a comeback win over Virginia and proceeded to author a 10-win season. Zaire’s lone start of 2015 came in the opener against Texas, and there’s no need to rehash the specifics.

It says here Russell will hold off Jarrett Stidham and reclaim the job he held before suffering a neck injury in late October. With Russell behind center, Baylor was 7-0 and racing toward a berth in the College Football Playoff. Without him, the schedule got more challenging and the Bears went 3-3, including a 23-17 loss to Texas.

After parting ways with Texas A&M after the 2014 season, the man once known as Kenny Trill gets a fresh start as the heir to Trevone Boykin. A former four-star prospect at Southlake Carroll, Hill impressed his new coaches last year running the Horned Frogs’ scout team. That’s not a surprise; Hill was a Heisman contender before A&M imploded in 2014.

The former Texas Tech starter considered Colorado and Bowling Green before announcing this week his transfer to Cal. It should be a seamless transition under Cal’s new offensive coordinator Jake Spavital, who will employ an Air Raid system similar to the one Webb ran at Tech. Surprisingly, in three seasons at Tech, Webb never took a snap against Texas.

Not elite, but started the entire 2015 season and authored eight wins. Attempted just 12 passes in a 38-20 romp over Texas.

In his first start, he led the Cyclones to a 24-0 blanking of Texas. Now, Lanning is the undisputed starter for new coach Matt Campbell.

Ertz, who tore his ACL one play into last season, is trying to reclaim his spot as QB1, but he’s being pushed by Joe Hubener, who started 11 games but was ineffective against Texas (97 yards passing).

Graduate transfer from Fresno State is the favorite to win the job.

Started the final eight games after Montell Cozart went down with a wrist injury. Cozart’s is back, so the position is up for grabs.