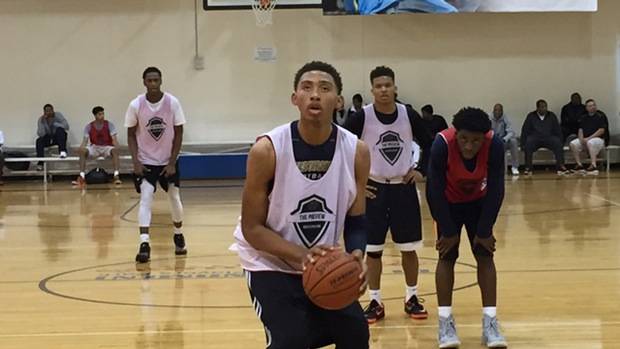 James Banks, a 6-10 center from Indiana, gave his verbal commitment to Texas on Thursday. (Photo via Scout.com)

Shaka Smart will have tough decisions to make very soon as USA Basketball released the under-18 men’s team training camp roster on Wednesday.

Invited to the training camp, where players will compete to fill 12 of the roster sports, include Texas signee James Banks and two-time All-Central Texas selection from St. Stephen’s High school, Jarrett Allen. The roster also includes several Class of 2017 players that Smart is currently targeting, such as Trae Young of Oklahoma and D.J. Harvey of Maryland.

Banks signed with Texas in the fall of 2015 and played his high school basketball in Indiana at La Lumiere School. The Decatur, Ga. native is a 6-foot-10-inch, 4-star prospect  likely play a large role for Texas in the 2016-17 season. Meanwhile Allen is the highest-rated Class of 2016 prospect who has yet to commit to a school, although various recruiting sites predict the Round Rock product is leaning toward Smart’s Longhorns.

Allen will be joined by another Texas product in Terrance Ferguson. The Dallas small forward is headed to Arizona next year and is already a three-time USA Basketball gold medalist.

Smart was selected as the head coach of the squad earlier this year and will coach the team in the 2016 FIBA Americas U18 Championships from July 19-23 in Valdivia, Chile. His assistants include University of Connecticut head coach Kevin Ollie and former Texas A&M head coach and current Maryland head coach Mark Turgeon.

Training camp will be held in Colorado Springs, Colo. from June 14-18 and will resume in Houston from July 11-15. The final roster will be announced shortly there after.

Players are eligible for the team if they are born after Jan. 1, 1998.