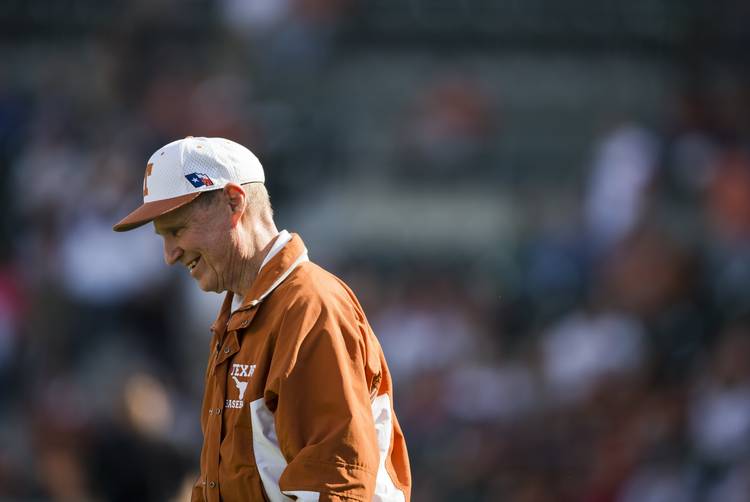 Ricardo B. Brazziell/American-Statesman 2/2/13 Texas Alumni Baseball Coach Cliff Gustafson made his way to 3rd base to coach the Texas Longhorn Alumni baseball Team on Saturday, Feb. 2, 2013.

If Cliff Gustafson has his way, Texas will take a good look at TCU’s Jim Schlossnagle to be its next baseball coach.

Gustafson, whose 1,466 coaching wins at Texas from 1968 to 1996 make him the Longhorns’ career leader in UT victories, said Tuesday that he’s an admirer of Schlossnagle, who has built the Horned Frogs into a premier program nationally.

“I’d love to see them get that guy from TCU,” Gustafson told the American-Statesman. “He’s always had a good hitting team, and he hasn’t been short on pitchers, either. He’s had three or four outstanding pitchers every year.”

Schlossnagle is among a handful of top coaches being mentioned as possible replacements for Augie Garrido, who was relieved of his coaching duties on Monday and reassigned to the role of special assistant to athletic director Mike Perrin. TCU, which ended Texas’s season last Saturday en route to winning the Big 12 tournament, is making its 12th regional appearance in Schlossnagle’s 13 seasons and will host Oral Roberts on Friday.

Gustafson believes Texas would be receptive to hiring a coach from within the Big 12.

“I think they would, if they had a reason to believe he was interested and that he would accept the challenge,” he said.

Speaking generally about the search, Gustafson said Texas should pursue candidates with a sound plan to correct the program’s prolonged struggles at the plate.

“I hope we can have a coach with a lot of energy and enthusiasm to build that up into the kids,” Gustafson said. “Also, he should be keen on recruiting hitters. I think that’s one of the areas we’ve been short on the past few years. We’re not getting the recruits we used to get, especially hitters. So we need a guy who’s in tune with that need.”

Gustafson also said he’d like to see Texas consider Spike Owen, who was the shortstop on Gustafson’s teams in the early 1980s. Owen, the third base coach for the Texas Rangers, told the American-Statesman on Tuesday that he’s “definitely interested.” Last year, he was the manager of the High Desert Mavericks, a Class-A advanced affiliate of the Rangers. The team went 78-62 and won the second half South Division title in the California League.

“I think he would be a great coach and have qualities that the next coach would need,” Gustafson said.