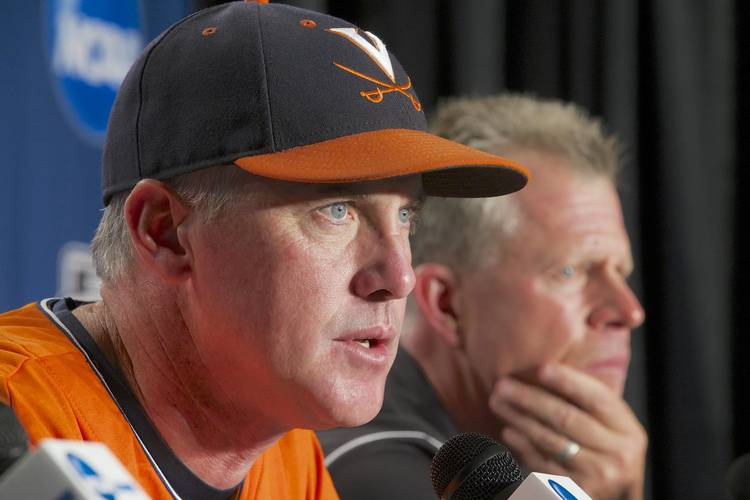 FILE - In this June 22, 2014 file photo, Virginia coach Brian O'Connor speaks at a news conference in Omaha, Neb., with Vanderbilt coach Tim Corbin, right. Vanderbilt is the defending national champion and unanimous preseason No. 1 team in college baseball. Virginia was national runner-up and enters the season well-stocked with starting pitching and one of the nation's best recruiting classes. (AP Photo/Nati Harnik)

If you haven’t heard, Texas is without a baseball coach after parting ways with Augie Garrido on Monday morning.

Since the NCAA postseason has yet to begin and will run through the end of June, it’s unlikely a replacement will be named anytime soon.

To get a better idea of what direction athletic director Mike Perrin might go, let’s take a look at the coaches whose teams make up the latest Baseball America Top 25.

Rob Childress, Texas A&M – Would Texas hire an Aggie? Would an Aggie leave for Texas? Childress is an excellent coach, but this isn’t happening.

Kevin O’Sullivan, Florida – At Texas, he would be stepping into better facilities and better fan support. Plus, he’d get a bump in pay from the roughly $600,000 he’s making in Gainesville. Keep in mind, Garrido has made at least $1 million every season for several years.

Jim Morris, Miami – Highly successful, but Texas won’t be in the market for a 66-year-old head coach. Plus, Morris has announced the 2018 season will be his last.

Paul Mainieri, LSU – As attractive as Texas’ job might be, there’s a case to be made Mainieri has it better at LSU.

Dan McDonnell, Louisville – Has coached the Cardinals for 10 years and in seven of them they’ve won 47 games or more.

Tim Tadlock, Texas Tech – Recently signed an extension to stay at his alma mater through 2022.

Monte Lee, Clemson – Hard to see him leaving Clemson after just one season.

Tim Corbin, Vanderbilt – Many insiders believe Corbin has the best job in baseball because unlike his contemporaries at public schools he’s able to stretch Vandy’s scholarship dollar with supplemental aid.

David Pierce, Tulane – Houston native turned things around at Sam Houston and has now done the same in two seasons at Tulane. In March, the Green Wave took two of three from Texas in Austin. The former Rice assistant could be a candidate for the Owls job whenever Wayne Graham calls it quits.

Tony Robichaux, Louisiana-Lafayette – Looking to take the Ragin’ Cajuns to a Super Regional for the third year in a row

Steve Owens, Bryant – The Bulldogs, seeded second in the Virginia regional, have won 14 of their last 15 games

Josh Holliday, Oklahoma State – Young and bright, but it would be hard to convince the Oklahoma State grad to leave Stillwater. Holliday’s dad, Tom, was Garrido’s pitching coach in the mid 2000s.

Dan Heefner, Dallas Baptist – Has turned down several bigger jobs, including Baylor last offseason. There is some belief that he may have been waiting for Texas to open.