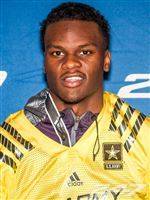 Record-setting receiver Tren’Davian Dickson, who at one time was planning to attend Texas, has asked for a release from his scholarship with Baylor, according to 247Sports.

Dickson, of Navasota, enrolled early at Baylor in January, but has apparently soured on the program in the wake of a rape scandal that resulted in the dismissal of head coach Art Briles.

According to the 247 report, Dickson is considering enrolling at Texas A&M. It’s unclear if there would be room for Dickson at Texas, which is bloated at receiver after bringing in four incoming freshmen.

Dickson, who set a national record in 2014 with 39 touchdown catches, becomes at least the eighth member of Baylor’s recruiting class to ask for his release. Among them is massive offensive lineman Patrick Hudson, who spurned the Longhorns for Baylor on signing day. Given UT’s issues on the line, the acquisition of Hudson is probably a no-brainer.

Baylor has 30 days to make a decision on Dickson’s request.