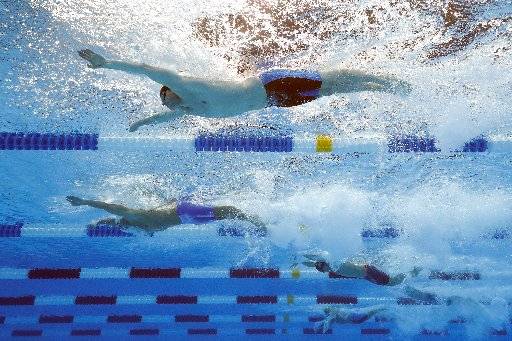 Jack Conger, Matthew Josa and Michael Andrew of the United States compete in a heat for the Men's 100 Meter Butterfly during Day Six of the 2016 U.S. Olympic Team Swimming Trials at CenturyLink Center on July 1, 2016 in Omaha, Nebraska. (Photo by Tom Pennington/Getty Images)

Michael Phelps wasn’t about to lose his last race in the United States.

With his huge wingspan cutting through the water, Phelps dazzled the home fans one last time.

Phelps made it three-for-three at the U.S. Olympic swimming trials, rallying on the return lap to win the 100-meter butterfly Saturday night.

In what was billed as the farewell race in his home country, Phelps competed in lane seven after a sluggish swim in the semifinals. As usual, it took him a lap to really get going, making the turn in fourth place.

But Phelps powered to the front, as he’s done so many times. Even with a long glide to the wall, he finished in 51.00 seconds.

When Phelps saw the “1” beside his name, he pounded the water and pointed toward his family — including 7-week-old son

Boomer — up in the stands. He’ll now get a chance to win his fourth straight gold in the 100 fly at Rio.

When his longtime coach, Bob Bowman, asked for a game plan before the race, Phelps kept it simple.

“I don’t want to lose my last race on American soil,” he said. “That was king of in my head.”

Katie Ledecky and Maya DiRado also won their third individual events on the next-to-last night of the trials, while Nathan Adrian made up for the disappointment of four years ago by winning the 50 freestyle.

For Ledecky, it’s been the dominating performance everyone expected, this one a nearly 10-second victory in the 800 freestyle.

For DiRado, it’s been a huge surprise, the first-time Olympian setting herself up to make quite a splash before she retires at age 23.

A late bloomer who already lined up a job as a business analyst in Atlanta, she followed her victories in the 200 and 400 individual medley by knocking off defending Olympic champion Missy Franklin in the 200 backstroke.

Franklin finished second to at least ensure she’ll get a chance to go for another gold in Rio.

Phelps, of course, is also planning to retire — for the second time — as soon as his fifth Olympics are over. At age 31, he cruised through Omaha with victories in both butterfly races as well as the 200 individual medley. Assuming he is on all three men’s relays in Rio, he’ll get a chance to add six more medals to his already massive collection — 18 golds and 22 medals overall.

The second Olympic spot in the 100 fly went to Tom Shields, who touched in 51.20 to barely beat out Seth Stubblefield (51.24) and Texas’ Jack Conger (51.26). Conger’s time was the seventh best time recorded this year. Texas senior Will glass placed seventh at 51.24.

“I felt great going out,” Conger said. “I really messed up my turn and glided on the exchange. I tried to pick it back up and I looked to see where everyone was around me. I kind of messed up my breathing pattern toward the end. It’s not the finish I wanted, but I’m still going to Rio (for the 4x200m free relay).

Phelps didn’t go quite as fast as he wanted during the trials.

He’ll be looking to add more speed over the next months.