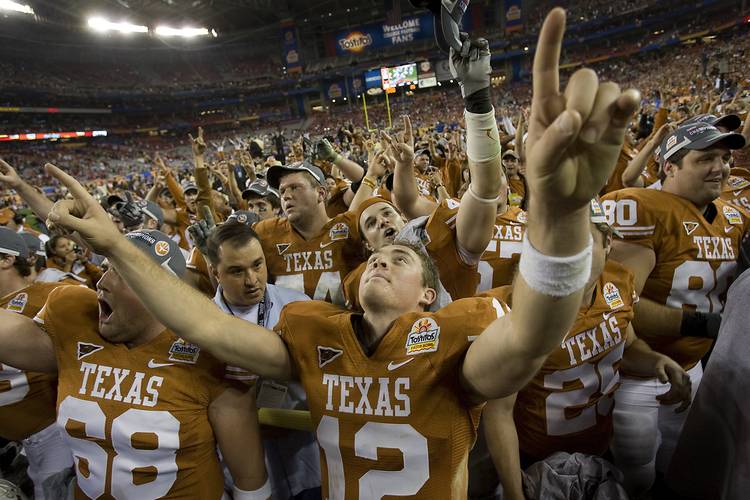 1/5/09 Ralph Barrera/AMERICAN-STATESMAN; The Tostitos Fiesta Bowl at the University of Phoenix Stadium in Glendale, Arizona--Texas v. Ohio State--during second half action. Texas' QB Colt McCoy celebrates with his team after staging a heroic comeback touchdown to Quan Cosby to defeat Ohio State in the closing seconds 24-21. McCoy was selected the Offensive MVP.

Texas standout sophomore linebacker Malik Jefferson is drawing some buzz this summer as he accumulates preseason accolades and is being placed on All-American watch lists.

One award he’s being vetted for is the Butkus Award, a trophy named after one of the best linebackers, and best football-named people on Earth, Dick Butkus. If Jefferson wins the award, he’d be the first Longhorn to do so since Derrick Johnson was the nation’s top linebacker in 2004. He’s also being eyed for the Bednarik  Award.

But it goes beyond that. He’d be just the second Longhorn player to win an individual award since 2009. Jackson Jeffcoat’s Hendricks Award in 2013 is the only award given to a Longhorn player in the 2010s.

Yeah. Colt McCoy, No. 12 retired at Texas, was pretty awesome that season. Can Malik have a “McCoy season?”

Well, he certainly isn’t the first Longhorn to receive award buzz months before the start of the season, so we shouldn’t call Dick Butkus just yet, but the award drought could be in jeopardy as Jefferson and three other sophomores were named to All-Big 12 preseason teams.  In fact, with the glut of young talent on the roster, the Longhorns could be in store for another accolade filled decade.

Here’s a list of all the Texas major award winners:

Earl Campbell, 1977 (Not a typo, he was the first winner of this award)

The Walter Camp Football Foundation Player of the Year