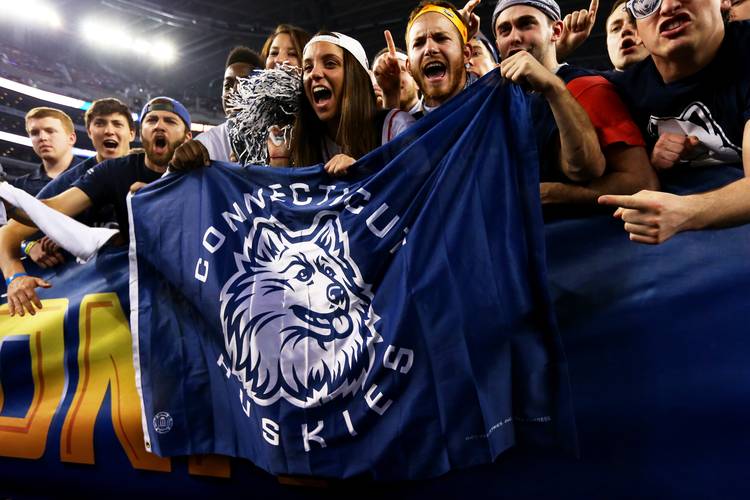 Connecticut Huskies fans cheer prior to the NCAA Men's Final Four Championship against the Kentucky Wildcats at AT&T Stadium on April 7, 2014 in Arlington, Texas. (Photo by Ronald Martinez/Getty Images)

Big 12 expansion is all about football.

We get it. Football is king. but the last few years, men’s basketball in the Big 12 has been hailed as one of the, if not the best, leagues in college basketball. Last year, the conference produced the best regular season game of the year in Oklahoma-Kansas I, then the league sent three teams to the second weekend of the NCAA tournament, two teams to the elite eight and one team to the final four.

Yes. Football is king, and we’re not arguing that. But expansion has an impact on more than just football. Here’s how we rank our 10 most likely expansion programs in terms of basketball power:

The Bulls are the least attractive basketball program among the schools we’re considering for expansion. The basketball team is being investigated for academic fraud and they’ve not had much success on the court. While their coach, Orlando Antigua, was one of the best recruiters in college basketball while working at Kentucky with John Calipari, he’s not had much success in his first two years with the Bulls. And now his brother may be at the center of the scandal.

Central Florida was bad last year, but at least they hired former Stanford coach and Duke assistant Johnny Dawkins this offseason. The Knights went 100-88 under former coach Donnie Jones, who took over for Kirk Speraw following his 17-year run.

Colorado State is led by one of the most infamous Big 12 basketball coaches in conference history: Larry Eustachy. The former Iowa State coach got in trouble for partying and drinking with college students while at Ames. He’s since rebuilt his career with stops at Southern Mississippi and now at Colorado State. In his first year at Colorado State he led the Rams to an NCAA tournament win and a 26-9 record. But since then his tenure has been a mixed bag with a 27-7 record in 2014-15 sandwiched between two .500-type seasons. The Rams played the 155th toughest schedule in the country last season and were two games above .500.

Boise State basketball won the Mountain West Conference’s championship in 2015 and reached the NCAA tournament in 2008, 2013 and 2015 after a tournament drought from 1995-2007. The Broncos have sustained success under Leon Rice, who will enter his seventh year as Boise’s head coach. Rice spent 12 years as a Gonzaga assistant and brought that consistency to Boise State, where ‘s had just one losing season (2011-12).

However, the program doesn’t have a rich basketball tradition and Rice hasn’t won an NCAA tournament game yet and his team isn’t known for playing a challenging schedule, which is why they’ve been overlooked as an at-large NCAA team despite winning 20 games in 2015-16 and 2013-14.  Boise State played the 117th strongest schedule last season.

Few teams on this list have a better basketball history than Houston, which under Guy Lewis for 30 years was one of the best programs in college basketball and produced Elvin Hayes, Clyde Drexler, Hakeem Olajuwon and “Phi Slama Jama.” But it’s been a rough stretch at times for Houston since 1986. The program bounced around conferences, tried hiring Drexler straight out of the NBA to be the head coach and snapped an 18-year tournament drought under former Longhorn coach Tom Penders in 2010. Penders resigned days after that tournament run and James Dickey, a former Texas Tech coach, couldn’t keep the momentum.

So Houston hired one of the most successful former Big 12 coaches ever, Kelvin Sampson after Sampson’s show-cause penalty was lifted. Sampson ran into trouble at Indiana following a successful tenure at Oklahoma and rebuilt his cred in the NBA as a popular assistant. In two years at Houston Sampson is 35-28 after winning 22 games last season (Houston played the 137th ranked schedule last season). The program has also started to make waves in Houston recruiting and nearly plucked Jarrett Allen away from the Longhorns, according to reports. Houston appears to be a program on the up with a proven head coach with a Final Four appearance on the resume.

The Cougars have had a ton of success under coach Dave Rose, who coached through his battle with cancer. He recruits nationally, as one does at BYU, and of course he gave the college basketball world Jimmer Fredette. BYU has a sneaky good basketball history before Rose was the coach. No official head coach has ever produced a losing record at BYU (not even Kansas can say that).

BYU also won more games last season than any team on this list, but they did that playing the nation’s 125th strongest schedule. Playing in the smallest conference of all teams on this list, the West Coast Conference (football is an independent), is a big reason why the schedule is on the weak side. Rose, with 276 wins at BYU, is probably on the top-10 list of best coaches who have never reached an elite eight, let alone a final four.

SMU was barred from the tournament last season, and had they been able to play in the tournament, probably would have been an extremely high seed and possibly made a run in the tournament. The Larry Brown experience was both great and horrible for SMU. Great in that Larry Brown usually wins where he goes and took a terrible program over in 2012 and rebuilt it into a contender and gave it a national profile. Horrible in that Larry Brown usually gets in trouble where he goes, gets NCAA sanctions placed on him and leaves abruptly.

Here’s why SMU is still a better program than the above teams: Tim Jankovich should do well. The former Bill Self assistant was the head coach of Illinois State where he went 104-64 in five seasons. He left to take the head-coach-in-waiting job under Brown at SMU and has further built his coaching pedigree. He knows the Dallas area well, as he was once the head coach of North Texas for four seasons. SMU should also do well because they’ve proven to in-state recruits that the program can be successful , something TCU coach Jamie Dixon hopes he can do.

Memphis’ best athletic team is men’s basketball. Period. With Memphis in the fold, the Big 12 would gain a consistent program with a fan base that expects 25-30 wins every season.

During the late 1990s, when the Cincinnati Bengals were drafting Akili Smith over Ricky Williams and the Reds had guys like Eddie Taubensee, the No.1 sports team in the Queen City was Bob Huggins’ Bearcats. Cincinnati was the team in Cincinnati and outside of retired members of the Big Red Machine, Huggins was the biggest sports celebrity in the town. And he won. He won a lot. Nick Van Exel, Danny Fortson and of course Kenyon Martin were superstars in that city. Post Huggins era has been up and down, but Mick Cronin, an alum and Cincinnati native, has led the Bearcats to six NCAA Tournaments in a row, including last season. The Bearcats have won at least 20 games every year since 2010-11.

The arena is getting upgrades and Cincinnati has a rich basketball tradition that dates back to the 1950s and includes Oscar Robertson. If the Big 12 wanted a consistently strong basketball program to join the fold, there is only one team with a better track record on this list than the Bearcats…

Yeah, it’s not even close. In terms of basketball, the Big 12 should be begging UConn to join the conference. They’d instantly rival Kansas as the best program in the conference and actually have more NCAA National Championships than the Jayhawks in basketball. UConn has won four titles since 1999. Kevin Ollie is probably the greatest example of a coach taking over for a hall of fame coach. Since Jim Calhoun retired in 2012, Ollie is 97-44 with three tournament appearances and, oh yeah, a national championship.

UConn is a top 10 program in the nation along with Cincinnati should be ranked in the top 25 to start this season.