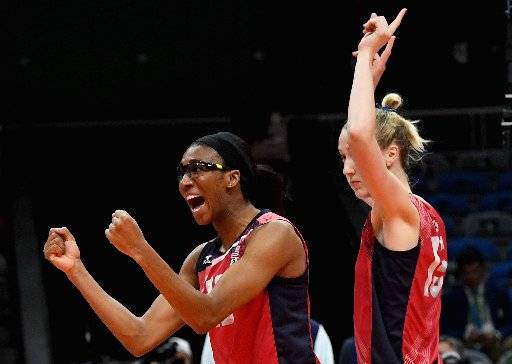 RIO DE JANEIRO, BRAZIL - AUGUST 12: Rachael Adams of the United States of America celebrates winning a point during the Women's preliminary volleyball match between the USA and Italy on Day 7 of the Rio 2016 Olympic Games at Maracanazinho on August 12, 2016 in Rio de Janeiro, Brazil. (Photo by Quinn Rooney/Getty Images)

Adams played in one set and had a kill and a block. Jordan Larson-Burbach led the team with 15 kills and 14 digs.

Team USA went 5-0 in pool play and clinched the top seed from Pool B. The U.S. team will play either Japan or Argentina in the quarterfinal round on Tuesday. The Americans are seeking their first gold medal in women’s indoor volleyball and are 17-2 in Olympic matches dating back to 2008. The two losses have been to Brazil in the gold medal match in 2008 in Beijing and in 2012 in London.

Men’s golf: Former Longhorn Jhonattan Vegas shot 1 under par and Texas ex Brandon Stone carded a 4 over 75 in the final round of the Rio Games golf competition Sunday.

Track and field: UT’s Jamal Wilson missed out on qualifying for the men’s high jump final after placing 25th in the qualifying round Sunday night in Rio.