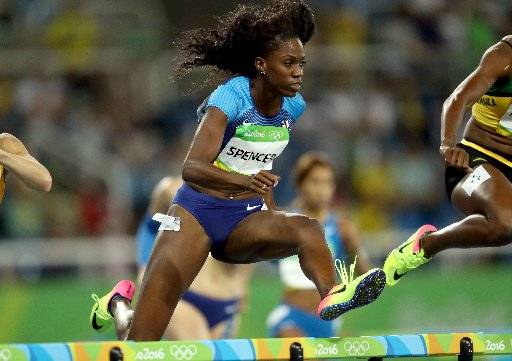 Spencer clipped the ninth hurdle but was able to save herself from falling and took the lead when she passed the 10th hurdle. Spencer crossed the finish line in 54.87 seconds and placed fifth overall in the semis. Team USA’s Dalilah Muhammad won her heat and posted the fastest time at 53.89.

Men’s 4oo meter hurdles: UT’s Byron Robinson ran a personal best time of 48.65 seconds in the men’s 400 meter hurdles semifinals, but missed out qualifying for the final by one one-hundredth of a second.

Robinson was third in his heat and placed eighth overall, just behind Rasmus Magi of the Bahamas. Boniface Mucheru Tumuti took the final spot after placing second in his heat at 48.85 seconds. The top two runners in each heat, plus the next two fastest times, qualified for the final.

Women’s volleyball: Texas ex Rachael Adams had 9 kills and a block as Team USA swept Japan in three sets 25-16, 25-23, 25-22 to advance to the semifinals at the Rio Games Tuesday.

Adams played in three sets and converted 9 of 16 swings. Kimberley Hill and Jordan Larson-Burbach led the team with 12 kills apiece. The Americans will play Serbia in the semis on Thursday. The Serbians swept fourth-ranked Russia 25-9, 25-22, 25-21 in the quarterfinals on Tuesday. Team USA and the Serbian national team have had some recent clashes. Serbia ousted the U.S. squad from the World Cup last year in Japan and Team USA beat the Serbs in pool play last week 25-17, 21-25, 25-18, 25-19.