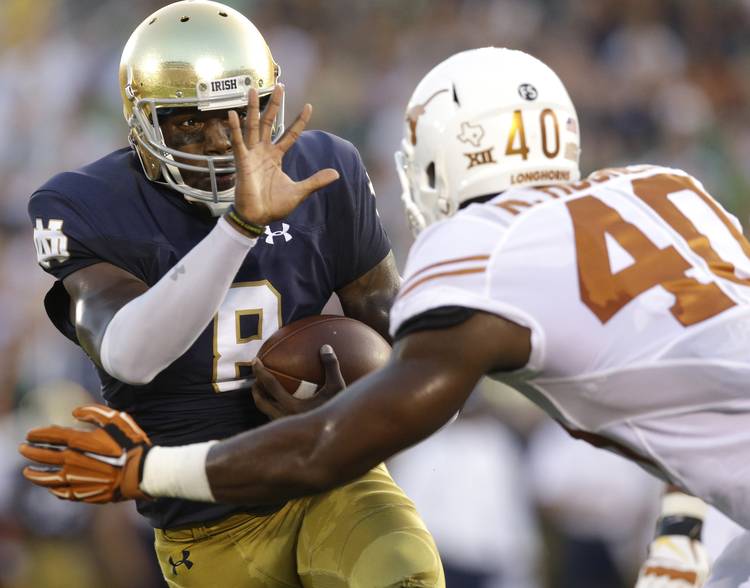 Prepare to see lots of quarterbacks on Sept. 4.

“If I list the top five playmakers, they’re in it,” Kelly said at Notre Dame media day. “So my ultimate decision was I can’t put one of those guys on the sideline against Texas.”

Zaire had a terrific day against the Longhorns in the 2015 season opener. He completed 19 of 22 passes for 313 yards and threw three touchdowns. Kizer came on in mop-up duty of a 38-3 Irish blowout.

Unfortunately for Notre Dame, Zaire suffered a season-ending ankle injury the next week against Virginia. That opened the door for Kizer, who went 8-3 as a starter and threw for 2,884 yards and 21 touchdowns.

After Wednesday’s practice, the South Bend Tribune reported that Kizer worked with the first-team unit initially and Zaire was with the second team.

“My whole goal is to turn chicken crap into chicken salad,” Zaire said of Kelly’s decision, according to Sports Illustrated. “We gotta make him right,”

Texas coach Charlie Strong has admitted for weeks that he wanted to keep Swoopes on the field to run the short-yardage “18-wheeler” package. Swoopes is 6-8 as a starter with the Longhorns.

But Strong has also talked up Buechele, praising everything from his “gym rat” workout ethics all the way to his merciless ping-pong skills. The freshman from Arlington Lamar enrolled early in January simply to get a head start on the quarterback derby.

Both Swoopes and Buechele will play, although Strong has yet to outline who will start and how much either athlete will play. Both quarterbacks are splitting first-team practice reps, according to Strong.