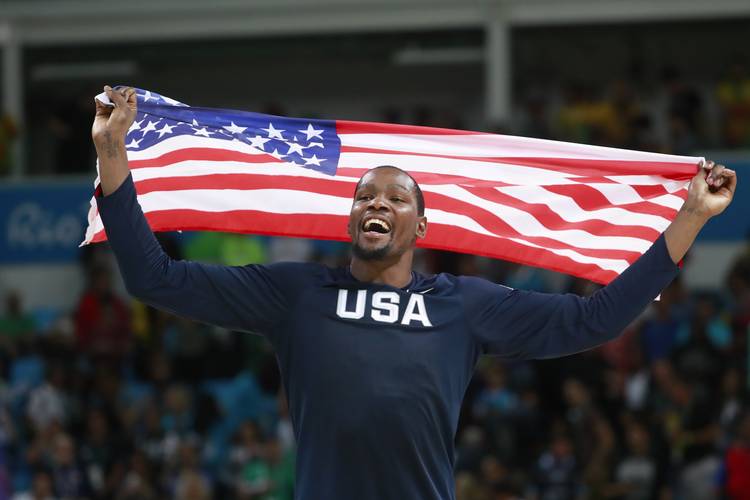 Kevin Durant of the U.S. celebrates with an American flag after the mens basketball gold medal game against Serbia at Carioca Arena 1 during the 2016 Summer Games in Rio de Janeiro, Aug. 21, 2016. The U.S. team won 96-66 to take the gold medal. (Doug Mills/The New York Times)

The Americans got their gold, and they did it easily.

Saving their best for last in a tournament that had been tough, the U.S. won its third straight gold medal and did it easily, beating Serbia 96-66 on Sunday.

Advertisement
After a few close calls earlier in the Olympics, this was no contest. Texas-ex Kevin Durant scored 30 points and helped the Americans jump out to a huge lead by halftime.

It was the final game with the national team for Mike Krzyzewski, who took the Americans back to the top and leaves with them there after becoming the first coach to win three Olympic gold medals.

Carmelo Anthony also picked up his third gold to go with a bronze, becoming the most decorated male in Olympic basketball history.

The U.S. beat Serbia by just 94-91 in pool play, holding on when Bogdan Bogdanovic missed a 3-pointer at buzzer. This rematch looked nothing like that meeting, but it did resemble the final of the 2014 Basketball World Cup, which the Americans won 129-92.

Anthony checked back into the rout in the final minutes so he could grab a seventh rebound, passing David Robinson for U.S. record with the 125th in his Olympic career. He had already become the leading scorer earlier in the tournament, capping an Olympic career that began with disappointment as a member of the U.S. team that finished third in 2004.

The Americans haven’t lost since, winning 25 straight in the Olympics.

A few of the victories were more difficult than usual in this tournament, where half the Americans’ eight games were decided by 10 points or fewer.

Krzyzewski said it didn’t matter how the Americans won, that there would be no questions as long as they did.

And there was no doubt they would Sunday once Durant heated up.

He had also scored 30 in the 2012 gold-medal game, after he poured in a U.S.-record 38 in one game en route to the MVP of the 2010 world basketball championship. He is already the Americans’ No. 2 career scorer in the Olympics in just two appearances.

When the final horn sounded, the U.S. players shared long hugs with each other and then Krzyzewski.

DeAndre Jordan went to the stands at Carioca Arena and collected an American flag, which he initially wrapped himself in like a blanket before holding it high over his head for all to see. After a slow start in Rio, there was no doubt about who was on top, and the Americans beamed as they walked off the floor before the medal ceremony where they will again be center court.

It was a tough ending for a impressive run for Serbia in its first Olympics as an independent nation. The heart of an international power in the former Yugoslavia, the Serbs hadn’t qualified for the Olympics since gaining their independence in 2006.

They dropped three games in the group stage but had the look of a team that could challenge the Americans after nearly knocking them off earlier in the tournament and overwhelming Australia in the semifinals.

They were down just 16-15 before Durant made a 3-pointer for the final points of the first quarter, and before then knew it he had turned the game into a blowout.

Two 3-pointers before a steal and dunk pushed the U.S. lead into double digits, and when he capped what may been the Americans’ best possessions in Rio, when they whipped the ball from side to side around the perimeter until it ended up in the hands of Durant, and then in the net. That 3 made it 52-29 over the stunned Serbs.

A challenging year for the Americans started long before they boarded the cruise ship they stayed on while in Rio. For the first time since 2004, many top American players opted to skip the Olympics, forcing them to bring some here who wouldn’t have been considered otherwise.

The 10 Olympic newcomers seemed to be jelling slowly and the U.S. had a pair of three-point victories and came in winning by just 21.4 points per game, more than 10 per game fewer than four years ago and about half the 43.8 the Dream Team won by in 1992.

Krzyzewski, an assistant on that team at the Barcelona Games, has long insisted that international basketball has gotten too strong for anyone to win that easily again.

Yet on Sunday, the Americans did.