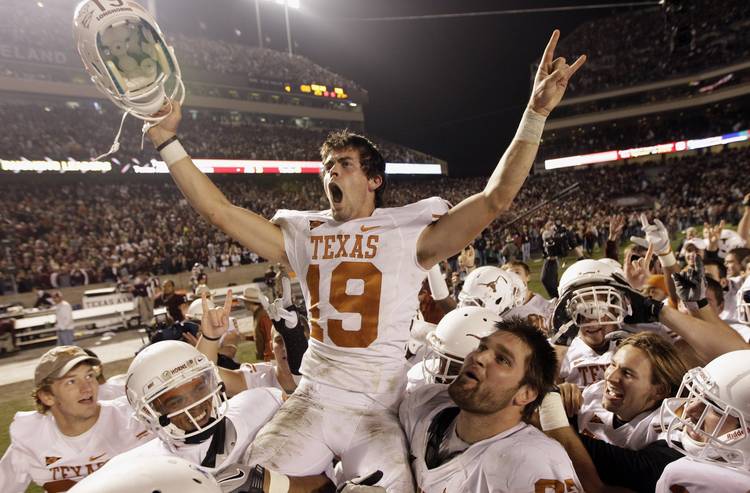 The Longhorns and Aggies go back more than 100 years, but their 16 meetings after the formation of the Big 12 in 1996 were undoubtedly some of the greatest. Here are the Top 5 Texas vs. Texas A&M games of the Big 12 era, in chronological order.

In the third year of the Big 12, the Aggies – behind running back Dante Hall, a hard-nosed defense and 10-straight wins – brought national title hopes to Austin.

The unranked Longhorns were led by first-year coach Mack Brown, and they raced out to a 23-7 lead on the back of Ricky Williams, who stamped his name on the Heisman Trophy and broke Tony Dorsett’s NCAA career rushing record that afternoon with 259 yards on 44 carries.

A&M rallied, and took a 24-23 lead with 2:20 left. That’s when a redshirt freshman quarterback named Major Applewhite led the Longhorns down the field to set up Kris Stockton’s game-winning 24-yard field goal.

To recap:  Ricky’s Heisman moment, Mack Brown’s first signature rivalry win and the birth of “The Major.” It’s worth reliving.

For perhaps the only time in its history the rivalry game took a backseat to events off the field. Days before the Longhorns traveled to College Station, 12 Texas A&M students were tragically killed when a bonfire collapsed.

Devastated, the A&M community rallied together behind the Aggies and created an emotion Mack Brown’s 9-2 Big 12 South Division champions simply couldn’t match. Texas fans may not want to remember the loss, but the images from that day will live forever as some of the rivalry’s most memorable.

One year before Texas’ national title run, the ‘Horns were on the rise behind quarterback Vince Young and running back Cedric Benson. While a 12-0 stumble against Oklahoma would keep Mack Brown’s bunch from playing for a Big 12 title, they reached the A&M game knowing a win could secure their first-ever BCS bowl.

It wasn’t the prettiest of wins, but Benson and Young combined for 258 rushing yards and 2 TDs to earn a bid to the 2005 Rose Bowl against Michigan.

The game is less remembered for the occurrence of one of the rarest plays in football — a one-point safety in the third quarter. Listen to the hilarity of Brad Nessler, Bob Griese and Lynn Swann trying to break it down.

Texas’ quest to return to the Rose Bowl was almost complete, with a 7-5 Colorado team waiting in the Big 12 Championship Game. But first, the Longhorns had to survive a trip to College Station. The Aggies had dropped five straight to Texas, and they weren’t about to let a sixth come easily.

The Longhorns got out of Kyle Field unscathed, but Vince Young’s Heisman hopes started to fizzle at the hands of the A&M defense. He finished 13 of 24 for 162 yards, one touchdown and one interception, and was sacked three times.

The Heisman – at least for the time being – belonged to Reggie Bush. Young would have to wait for the last laugh in Pasadena.

It was only fitting that the last game between the most storied college football programs in Texas came down to the final play. After Ryan Tannehill put the Aggies in front with 1:48 remaining, Case McCoy led the Longhorns down Kyle Field one last time.

You remember the rest. Go ahead, see if Justin Tucker’s kick doesn’t send chills down your spine.