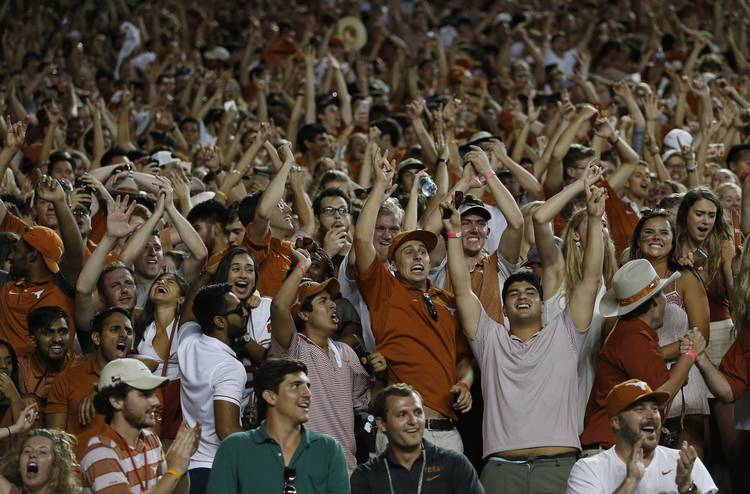 No matter if you were there or not, the image of Tyrone Swoopes diving into the end zone to beat Notre Dame will be etched in every Texas fan’s memory for years to come.

Even if you couldn’t make it to Royal-Memorial Stadium for the historic night, these fans captured the moment from every vantage point so you can relive it again – and again, and again.

Who knows? In 20 years, you may have convinced yourself you were part of the record crowd of 102,315.

We’ll start around the end zone, where these lucky fans got a close-up look at the “18-wheeler” rolling through.

Listen to how quiet it got in anticipation of what would become the final play. And then… pandemonium.

Do you think all these people knew each other before they spent four hours experiencing one of the greatest college football games in history? Not a chance. Watch the high-fives fly after Swoopes scores.

We’ve all sat next to that fan who calls every play before it happens. Annoying, right? We’ll give him a pass on this one. Watch for the disappointed Notre Dame fan at the end, too.

The greatest college football game I've ever been to…

Of course, some of the best reactions come from the upper deck. The view might not be as good, but the atmosphere just wouldn’t be the same without the crazies who pack in the top rows. They definitely got their money’s worth Sunday night.

On the other side of the spectrum, there are the fans behind the glass of Royal-Memorial’s box suites. Watch as they lose it like everyone else on the final play.

Pro tip: When something truly awesome is about to happen, don’t waste it on a Snapchat. Your caption isn’t telling us anything we don’t know, bro. (But that reaction is still priceless. Hook ’em.)

When we beat Notre Dame and I ugly screamed! Hook 'em🤘🏻 #EyesToEyes

This was a AWESOME ending to an incredible game! While I wish we didn't have to go to overtime (twice) it was a HAPPY ending!!! #texasfight #longhorns #overtime #upset #ihavenovoice #happy

UPDATE: Larry Barnett sent us this video, which captures the moments leading up to the final play all the way through the teams shaking hands. At about the 1:16 mark, you’ll hear someone — presumably Larry — remind the Longhorns of their manners. “Come on, go shake their hands, you dummies!”

Leave it to a Texas fan, mere moments after experiencing the team’s biggest home win in years, to remember sportsmanship. Nice work, Larry (assuming that was you).